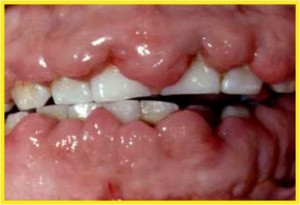 The gums on the outer surface of the front teeth are more severely affected than back teeth. The swelling is fibrous â€“ firm, pink and lobulated, and the swelling does not appear to be severe if oral hygiene is good. With superimposed inflammation the gums, swelling can become soft and red and bleed when provoked. The gum enlargement can almost cover the teeth though the size of the swelling not related directly to drug dosage.

Changing the drug rarely possible therefore treatment is restricted to oral hygiene instructions and scaling of gumline. Local removal of overgrowth tissue can be done by gingivectomy however recurrence is common 3 to 6 months later. 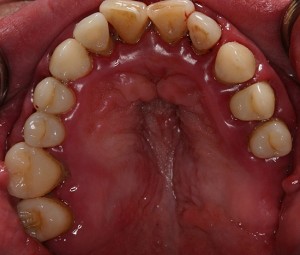 Caused by commonly non-dysjunction during oogenesis and rarely reciprocal translocation of groups 13-15 and 21-22, incidence of Down syndrome is 1:700 births increasing to 1:100 with mothers over 45.

There is varying degree of metal handicap with mongoloid facial features, and individuals are prone to infections and 20 times incidence of leukemia.

Typically class III occlusion with anterior open bite seen and there is a large tongue and a lack of lip seal. Furthermore there is an increased incidence of chronic periodontitis and increased susceptibility to acute necrotizing ulcerative gingivitis (ANUG).

Oral care of Down syndrome people

Frequent monitoring and prompt treatment of any problem should be done. Good plaque control and frequent scaling are important and the caretakers may have to finish off the plaque control.

This autosomal dominant trait with an incidence of 1:350,000 can occur singly or in association with other inherited syndromes though there is also a fairly common idiopathic version.

Hereditary gingival fibromatosis is revealed on eruption of teeth, usually permanent teeth, with excessive production of collagen in the gums corium. The condition can be generalized or localized, delaying tooth eruption and the cause seems to be permanently activated fibroblasts.

Crohnâ€™s disease is a chronic inflammatory condition affecting any part of the gut from the mouth to the anus with regional enteritis primarily of the terminal ileum. There is stenosis (abnormal narrowing of a bodily canal or passageway) with necrotic breakdown and scarring of gastrointestinal tract and other gastrointestinal areas are also affected including the mouth. 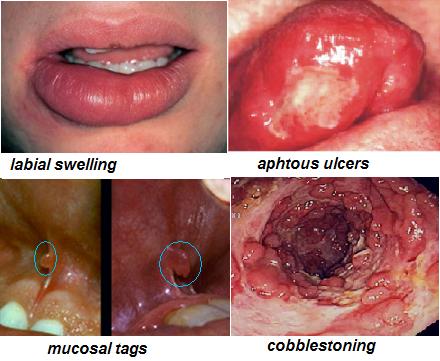 Blood disorders are not causes of chronic periodontal disease but can be dramatic secondary factors. For example severe gum bleeding is a common feature in acute leukemia and it can be the presenting feature of the disease.

Leukemia is a malignant neoplastic disease of white blood cells-forming tissues, usually with increased number of leucocytes in the circulation included are developing blast cells and other tissues including lymph nodes are infiltrated. 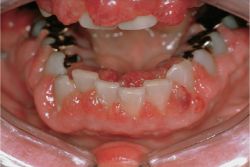 The oral features reflect the white blood cells disturbance, and also the effects of treatment with radiotherapy and chemotherapy:

Treatment of periodontal disease in leukemia

Effort should be made to provide treatment during remissions and professionally administered control is worthwhile. Chlorhexidine rinse regardless of staining should be used with antibiotic cover for invasive treatment and frank infections.