Gum disease is the disorders of supporting tissue of teeth which will result in ultimate tooth loss if left untreated, but there are several ways to both treat and prevent them. It can be divided into two major stages: gingivitis (gingival disease) and periodontitis (periodontal disease).

The most common types of gum disease progressed as below:

Gingivitis is the inflammation of gingival (gum) without loss of tissue attachment of teeth. In the early stage of gingivitis, bacteria in plaque build up, causes the gums to become inflamed (red and swollen). 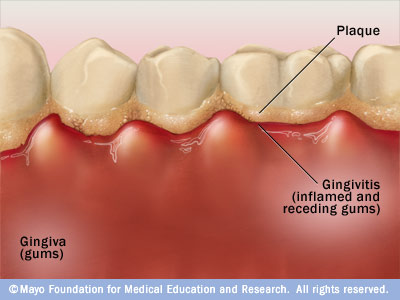 The most common localized factor is the long-term effect of plaque deposits. It is usually caused by bacterial plaque that accumulates in the small gaps between the gums and the teeth and by calculus (tartar) that forms on the teeth.

Predisposing factors include systemic, medication and malnutrition. Systemic factors, such as diseases that affect the body’s immune response, hormonal changes in puberty and pregnancy and diabetes mellitus, may increase the sensitivity of gingiva to irritation. Medications such as birth control pills and antiepileptic drugs, and ingestion of heavy metals such as lead and bismuth (found in some pharmaceuticals), may also exaggerate the inflammatory response. Malnutrition or nutritional deficiencies include scurvy (vitamin C deficiency).

Signs and symptoms of gingivitis:

Periodontitis is the extension of gingival disease to apical (root) that results in destruction of supporting tissue of teeth and bone loss. In advance, the tooth will become mobile and may lead to tooth loss.

Periodontitis can be classified into: 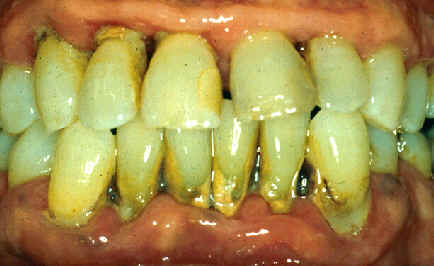 Signs and symptoms of chronic periodontitis:

-This is a common type of gum disease in children which occur after puberty.It is rapid in progression and often associated with genetic problems

This type of periodontitis often begins at a young age. Systemic conditions such as heart disease, respiratory disease, female hormonal alterations, drug-induced disorders, hematological disorders such as leukemia, immune system disorders and diabetes are associated with this form of periodontitis.

Signs and symptoms of ANUG:

May involve more than one visit (3-5 visit/days)

Combined periodontal-endodontic lesions are localized. Infection may originate in from periodontal and or pulpal tissues.

3 thoughts on “All about gum disease Part 1”