Dentin-forming cells, odontoblasts, which originate from the ectomesenchyme, form a single layer of cells between the dentin and pulp. The cell body is located on the pulpal wall of dentin and the cellular process extends into the dentinal tubule within the mineralized dentin. The cell bodies are from 3 to 5 m wide and 20 to 40 m long depending on the age of the tooth. The odontoblastic process fills the lumen of the dentin tubule and it is composed of a main trunk, with a diameter of 0.5 to 1 m, and lateral branches. Contrary to the cell body, cell organelles (Golgi apparatus, rough endoblastic reticulum or mitochondria) usually do not appear in the odontoblastic process; however, microtubules, filaments and coated vesicles are present. Odontoblasts are connected to each other with interodontoblastic collagen, the so-called von Korff fibers. Frequent bundles of collagen fibrils enter the odontoblast layer from predentin and are present between odontoblast cell bodies. Ultimately they pass through the odontoblast layer into pulp. Histologically, secretory odontoblasts are columnar in shape. A large number of cytoplasmic organelles are identifiable in young odontoblasts, whereas, aged odontoblasts lose their columnar shape and contain a small number of Golgi apparatus and a small-sized rough endoblasmic reticulum. 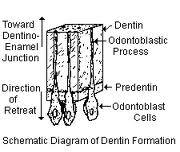 Odontoblasts synthesize dentin matrix during their entire lifetime. The unmineralized zone between the odontoblasts and mineralized dentin is called predentin. Young odontoblasts are secretorily active and produce predentin at a faster rate than the older cells. During the phase of collagen aggregation, the odontoblasts regulate the order of collagen fibers and modify the composition of the extracellular matrix. Dentin is formed by two simultaneous processes, the formation of collagenous matrix (predentin) and the formation of mineral crystals on this matrix. Dentin formation starts with the synthesis of the extracellular matrix which is mainly formed by the fibrous web of type I collagen. In addition, type V collagen, proteoglycans and other non-collagenous proteins (serum proteins, phosphoproteins and Gla-proteins) are also secreted. The non-collagenous matrix proteins may act as mediators of cell-matrix interactions, matrix maturation and mineralization. As a result of odontoblastic activity, some non-collagenous proteins are secreted and the density of the collagenous network increases before the dentin mineralization front.

The mineralization process of the extracellular matrix is controlled by the function of various inductive and reductive non-collagenous proteins, which initiate and control the formation and the growth of hydroxyapatite crystals. The initiation of mineralization is believed to be constituted by an ion nucleation phenomenon mediated by odontoblasts. Calcium is essentially the only ion for which data are available. A major portion of the Ca2+ ions are transported through a cellular route under the control of odontoblasts. Odontoblasts maintain the Ca2+ ion balance by transmembranic transport mechanisms, including Ca-ATPase, Na+ exchangers and calcium channels. The odontoblastic plasma membrane Ca2+ pumps, present in mineralizing dentin, may play a role in calcium transport and mineralization. 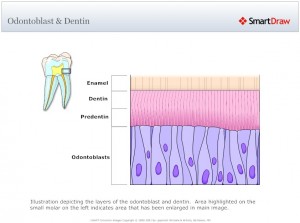 Non-collagenous proteins could be involved in the nucleation of calcium- and phosphate crystals (hydroxyapatite) and may also control the initial growth and orientation of the ionic nucleus. Phosphophorin, at a low concentration, acts as a nucleator, but at higher concentration acts as an inhibitor of ionic nucleation. The low affinity of dentin sialoprotein (DSP) seed crystals and its limited effect on hydroxyapatite formation and growth suggests that DSP is not a primary regulator in dentin mineralization. Collagen is thought to control mineral orientation and organization. The hydroxyapatite crystals formed are oriented with the long axes, parallel to the long axes of the collagen fibrils. 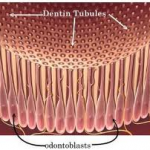 Tertiary dentin (reactionary or reparative or irregular secondary dentin) is the outcome of odontoblastic response to irritation occuring mainly during secondary dentinogenesis and is caused by dental abrasion, attrition, cavity preparation, erosion or dental caries defines reactionary dentin to be the result of irritation of post-mitotic odontoblasts, whereas reparative dentin is formed by odontoblasts or odontoblast-like cells which differentiate from pulp cells after the cell death of primary odontoblasts. Reactionary dentinogenesis during dental caries may result from the solubilization of growth factors, transforming growth factor-beta (TGF-beta), from the dentin matrix which initiate the stimulation of odontoblasts. It has been demonstrated that TGF-beta 1 and beta 3 can stimulate secretion of extracellular matrix by odontoblasts, are mitogenic to pulp cells, and that TGF-beta 3 may have inductive effects on pulpal cells. Recent studies show that dentin and bone matrix contain various angiogenic growth factors, bone morphogenic proteins, bone sialoproteins and osteopontin, which may be beneficial to the reparative response of the dentin-pulp complex. The form and the regularity of reparative dentin appear to be dependent on the intensity of the external stimulus.