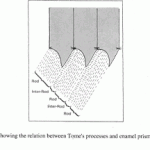 There is morphogenesis and alignment of secretary cells.

In the maturation phase, 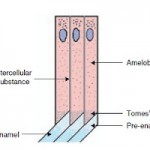 In the secretory stage,

When this first layer is formed,

The matrix within the pit will eventually become,

The only distinguishing factor between the two is,

the orientation of the calcium crystals.

Stages of amelogenesis in a mouse

In the maturation stage,

These signs demonstrate that the ameloblasts have changed their function from,

Production, as in the secretary stage, to transportation.

The noteworthy proteins involved are ,

1.Â Â  Formed as a result of trauma of birth

3.Â Â  Formed as the anamel rods the prism direction and thickness is changed

Prisms do not follow a straight path from dentino enamel junction to the surface.

1.Â Â  Enamel prisms are perpendicular to dentine enamel junction to the surface

2.Â Â  Their direction reflect the direction of movement of ameloblast during enamel formation 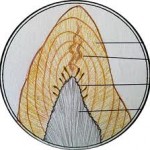 Their changing direction and arrangement makes,

1.Â Â  Is not a straight line but is interlocking of 2 tissues

2.Â Â  This prevents shearing apart of the 2 tissues during mastication

4.Â Â  Where the concavities of scalloped project in to the dentine

This scalloped appearance is prominent:

1.Â Â  Beneath the cusps

3.Â Â  Hydroxyappatite crystals in dentine are smaller then enamel 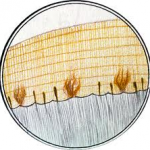 Normally the dentinal tubules terminate at the:

Surface enamel has a wavy surface: