The bell stage is known for the histodifferentiation and morphodifferentiation that takes place. The dental organ is bell-shaped during this stage, and the majority of its cells are called stellate reticulum because of their star-shaped appearance.

Other events occur during the bell stage. The dental lamina disintegrates, leaving the developing teeth completely separated from the epithelium of the oral cavity; the two will not join again until the final eruption of the tooth into the mouth.

The crown of the tooth, which is influenced by the shape of the internal enamel epithelium, also takes shape during this stage. Throughout the mouth, all teeth undergo this same process; it is still uncertain why teeth form various crown shapesâ€”for instance, incisors versus canines. There are two dominant hypotheses. The “field model” proposes there are components for each type of tooth shape found in the ectomesenchyme during tooth development. The components for particular types of teeth, such as incisors, are localized in one area and dissipate rapidly in different parts of the mouth. Thus, for example, the “incisor field” has factors that develop teeth into incisor shape, and this field is concentrated in the central incisor area, but decreases rapidly in the canine area. 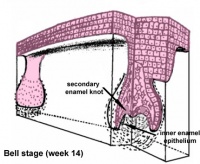 The other dominant hypothesis, the “clone model”, proposes that the epithelium programs a group of ectomesenchymal cells to generate teeth of particular shapes. This group of cells, called a clone, coaxes the dental lamina into tooth development, causing a tooth bud to form. Growth of the dental lamina continues in an area called the “progress zone”. Once the progress zone travels a certain distance from the first tooth bud, a second tooth bud will start to develop. These two models are not necessarily mutually exclusive, nor does widely accepted dental science consider them to be so: it is postulated that both models influence tooth development at different times.

Other structures that may appear in a developing tooth in this stage are enamel knots, enamel cords, and enamel niche.

Hard tissues, including enamel and dentin, develop during the next stage of tooth development. This stage is called the crown, or maturation, stage by some researchers. Important cellular changes occur at this time. In prior stages, all of the inner enamel epithelium cells were dividing to increase the overall size of the tooth bud, but rapid dividing, called mitosis, stops during the crown stage at the location where the cusps of the teeth form. The first mineralized hard tissues form at this location. At the same time, the inner enamel epithelial cells change in shape from cuboidal to columnar. The nuclei of these cells move closer to the stratum intermedium and away from the dental papilla.

The adjacent layer of cells in the dental papilla suddenly increases in size and differentiates into odontoblasts, which are the cells that form dentin. Researchers believe that the odontoblasts would not form if it were not for the changes occurring in the inner enamel epithelium. As the changes to the inner enamel epithelium and the formation of odontoblasts continue from the tips of the cusps, the odontoblasts secrete a substance, an organic matrix, into their immediate surrounding. The organic matrix contains the material needed for dentin formation. As odontoblasts deposit organic matrix, they migrate toward the center of the dental papilla. Thus, unlike enamel, dentin starts forming in the surface closest to the outside of the tooth and proceeds inward. Cytoplasmic extensions are left behind as the odontoblasts move inward. The unique, tubular microscopic appearance of dentin is a result of the formation of dentin around these extensions.

After dentin formation begins, the cells of the inner enamel epithelium secrete an organic matrix against the dentin. This matrix immediately mineralizes and becomes the tooth’s enamel. Outside the dentin are ameloblasts, which are cells that continue the process of enamel formation; therefore, enamel formation moves outwards, adding new material to the outer surface of the developing tooth.