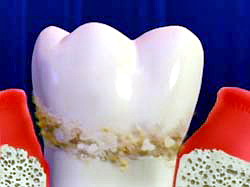 When you open your mouth while looking in the mirror, you noticed this crust-like thing stuck on the borders between your gums and teeth. No matter how hard you try, you cannot seem to remove it by yourself. This incrustation that forms on the teeth and gums is called teeth tartar, or known as dental calculus to the dental professionals.

A last stage in the maturation of some dental plaques is characterized by the appearance of mineralization in the deeper portions of the plaque to form dental calculus. The term calculus is derived from the Latin word meaning pebble or stone. The lay term, tartar, refers to an accumulated sediment or crust on the sides of a wine cask. Some people do not form calculus, others form only moderate amounts, and still others form heavy amounts.

Why do I need to remove tartar?

Tartar itself is not harmful. However, a layer of unmineralized, viable, metabolically active bacteria that are closely associated with the external calculus surface is potentially disease causing. Calculus cannot be removed by brushing or flossing. It is often difficult to remove all the calculus, even dental cleaning professionally, without damaging the tooth, especially the softer root cementum.

However, calculus needs to be removed because its presence makes routine oral hygiene more difficult or even impossible by forming calculus spurs. These structures may contribute to plaque accumulation and stagnation. Dental tartar removal is also a requirement to regenerate lost or damaged tissues supporting the teeth following treatment.

What are the causes of tartar on human teeth?

In addition to local factors such as poor oral hygiene and overlapped teeth, behavioral and systemic conditions may affect calculus formation. For example:

Calculus formation is related to the fact that saliva is saturated with respect to calcium and phosphate ions. Precipitation of these elements leads to mineralization of dental plaque giving rise to calculus. The crystals in calculus include hydroxyapatite, brushite, and whitlockite, all of which have different proportions of calcium and phosphate in combination with other ions, such as magnesium, zinc, fluoride, and carbonate. 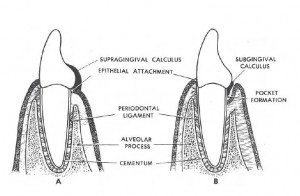 Supragingival calculus forms on the tooth above the gingival margin, and frequently develops opposite the duct orifices of the major salivary glands. It is often found where saliva pools on the inner surfaces of the lower front teeth, and can form in the fissures of teeth. Subgingival calculus forms from calcium phosphate and organic materials derived from serum, which contribute to mineralization of plaque beneath the gumline.

The two types of calculus may differ in color. Supragingival calculus, which derives its mineral content from saliva, usually appears as a yellow to white mass with a chalky consistency. Subgingival calculus, which derives its mineral from the inflammatory exudate in the sulcus and gum pocket, appears gray to black in color and has a flint-like consistency. The dark coloration may be caused by bacterial degradation of components of the exudate from bleeding that accompanies gums inflammation. 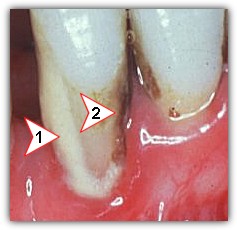 Alkaline conditions in dental plaque may be an important predisposing factor for formation of tartar on teeth. Calculus formation is not restricted to one bacterial species, or even to those growing at neutral or slightly acidic pHs. Not all plaques mineralize, but a plaque that is destined to mineralize begins to do so within a few days of its initial formation, even though this early change is not detectable at a clinical level. Mineralization usually begins in the intercellular plaque matrix but eventually occurs within the bacterial cells.

Are there any ways to reduce tartar formation?

Several agents are currently available to reduce calculus formation, including dentifrices that contain pyrophosphate, or metal ions such as zinc. One dentifrice for tartar control contains two soluble phosphates, tetrasodium pyrophosphate and disodium dihydrogen pyrophosphate, in addition to fluoride. The pyrophosphate ion not only serves to disrupt the formation of calcium phosphate crystals, but also inhibits some bacterial growth at concentrations significantly lower than the levels found in dentifrices.