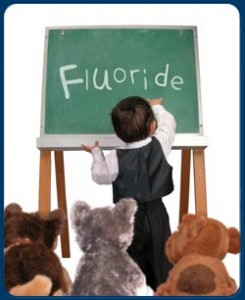 Fluoride is widely used to prevent cavities or tooth decay. The cavity reduction that has been achieved by the use of fluoride has been a major public health accomplishment. However the use of fluoride has been subjected to dissent by anti-fluoride organizations for its side effects. But before you join en-masse, you should know the importance and safety precautions of fluoride, then decide for yourself whether you could benefit from using fluoride.

Fluoride is widespread in nature, occurring in fresh water, sea water, fish, vegetables, milk and organic compounds. Physiologically, fluoride is unique in that it does not behave like other halogens and has been termed a seeker of mineralized tissues. When present in calcium and phosphate, fluoroapatite will be formed preferentially. It is absorbed in blood from the stomach and is then deposited in bones or excreted by the kidneys.

How does fluoride work? 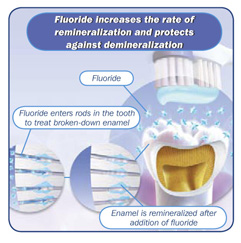 How is dental fluoride delivered?

There are two methods fluoride can be distributed, either systemically or topically.

Topical fluorides can be professionally applied or self-applied.

Safety and toxicity of fluoride

Fluoride is present in all natural waters to some extent. Many simple chemicals are toxic when consumed in excess, and the same is true for fluoride. Fluoride is absorbed rapidly mainly from the stomach and peak blood levels occur one hour later. It is excreted via the kidneys, but traces are found in breast milk and saliva. The placenta only allows a small amount of fluoride to cross; therefore fluoride before birth is relatively ineffective.

Dental fluorosis (mottling) occurs due to a long-term excessive consumption of fluoride. It is confined to areas with a high level of fluoride occurring naturally in the water. Fluorosis causes a defect in tooth enamel during its formation and causes white flecks or spots to form on the tooth surface which can affect the appearance of the individual.

To reach the 5mg/kg fluoride threshold which requires hospitalization, a five-year old weighing about 19kg would have to ingest 95 (1milligram fluoride) tablets, 63ml of 1500ppm toothpaste.

Advice about managing fluoride overdose can be sought by dialing 1-800-222-1222 to reach the Poison Help Hotline.