Does your dentist always remind you to use fluoride toothpaste? Many of us are aware of the  importance   of using an appropriate toothpaste but little do we know about the ingredients in the  toothpaste which protects our tooth from dental decay. There are several components in a  toothpaste which help in protecting the tooth: END_OF_DOCUMENT_TOKEN_TO_BE_REPLACED

Tooth whitening, also  known as dental bleaching is a common procedure in dentistry in which chemical agent such as carbamide peroxide is used to lighten the shade of the tooth. Dental bleaching is usually done to get rid of unsightly stains on the teeth.  There are several factors which can cause tooth staining: END_OF_DOCUMENT_TOKEN_TO_BE_REPLACED

What is a dental bridge? 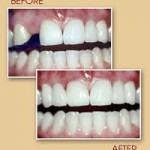 A dental bridge is also known as a fixed partial denture. It is used to replace a single missing      tooth or a short span of missing teeth. It is a permanent prosthesis, which is joined to the tooth      or implant adjacent to the space created by the missing tooth. Before the bridge is fabricated, the    adjacent tooth on both sides of the missing space is prepared (a cantilever bridge requires only    one adjacent tooth to be prepared). The tooth is reduced to the appropriate size, depending on the   material used to fabricate the bridge. The reduced tooth will serve as the anchor unit, holding the   bridge in place. A dental bridge can be fabricated using all metal, all porcelain, porcelain fused to   metal or gold. END_OF_DOCUMENT_TOKEN_TO_BE_REPLACED 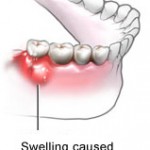 Abscess is a collection of pus in a cavity formed by the tissue due to bacterial infection or trauma by foreign objects. The pus is formed by dead inflammatory cells and bacteria. It is a defensive reaction of the tissue to prevent the spread of infection to the other parts of the body. A tooth abscess is pus enclosed in the tissues of the jaw bone at the apex of the root. There are three types of tooth abscess: END_OF_DOCUMENT_TOKEN_TO_BE_REPLACED

A dental filling is a dental restorative material used to restore the function, integrity and morphology of missing tooth structure. The structural loss typically results from caries or external trauma. It is also lost intentionally during tooth preparation to improve the aesthetics or the physical integrity of the intended restorative material.

Dental fillings can be divided into three broad types: END_OF_DOCUMENT_TOKEN_TO_BE_REPLACED 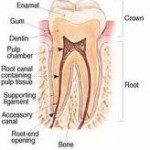 A tooth consists of enamel, dentine, cementum and pulp. The pulp is a living tissue, inhabitated by nerve tissues, blood vessels and cells responsible for tooth formation and repair. Root canal therapy /treatment (endodontic therapy) involves removal of these structure which have been contaminated by bacteria and damaged permanently. The subsequent hollow space is cleaned, shaped and decontaminated using files and irrigants. The decontaminated space is then filled with inert filling material. After root canal therapy, the tooth will be ‘dead’ or non vital because it contains no living tissues. END_OF_DOCUMENT_TOKEN_TO_BE_REPLACED 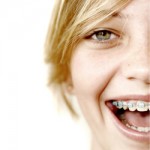 Braces are fixed orthodontic appliance which is used to straighten your teeth, providing you a better smile and confidence.While wearing the appliance, you should avoid certain types of  foods which will stick between the wires and make it difficult to keep your mouth clean. These foods can also damage the braces. While wearing the orthodontic appliance, you should constantly clean your teeth and braces using the appropriate brushing method and instruments. END_OF_DOCUMENT_TOKEN_TO_BE_REPLACED

Composite resin and amalgam are the most commonly used filling materials in dentistry. Throughout the years, the content of both materials have been modified to improve the quality of the fillings.

Dental composite resins are types of synthetic resins. A composite material is a product which consists of two distinct phases normally formed by blending together components having different structures and properties.The purpose of this is to produce a material having properties which could not be achieved from any of the individual components alone. The two main components of composite filling materials are resin phase and the reinforcing filler. The resin gives the material the ability to be moulded at ambient temperature and polymerization achieved in a short time.Synthetic resins evolved as restorative materials since they were insoluble, aesthetic, and insensitive to dehydration and were inexpensive. It is easy to manipulate them as well. Composite resins are most commonly composed of Bis-GMA monomers, a filler material such as silica and in most current applications, a photoinitiator. Dimethacrylates are also commonly added to achieve certain physical properties such as flowability. Further modification of its physical properties is achieved by changing the concentrations of each constituent.Unlike amalgam which essentially just fills a hole, composite cavity restorations when used with dentine and enamel bonding techniques restore the tooth back to near its original physical integrity.

The main advantage of dental composite over amalgam is improved aesthetics. Composite is a tooth coloured material and it comes in a wide range of tooth colours allowing near invisible restoration of teeth. Composite is bonded to the tooth with the use of dentine bonding agent. This strengthens the tooth structure. Unlike amalgam, there is no need to create retentive features which destroys healthy tooth structure because composite bonds to tooth chemically. Therefore, using composite material as filling is proven more conservative and less tooth preparation is needed. END_OF_DOCUMENT_TOKEN_TO_BE_REPLACED