The oral lymphoepithelial cyst develops within a benign lymphoid aggregate or accessory tonsil of the oral or pharyngeal mucosa. The surface of such aggregates may be indented with tonsillar crypts, as are the much larger pharyngeal tonsils of the lateral pharyngeal walls. The crypts may become obstructed by keratin or other debris, or the surface opening may become constricted during episodes of inflammatory hyperplastic responses. Certain cases develop a complete disunion of the crypt epithelium from the surface epithelium, resulting in a subepithelial cyst lined by the old crypt epithelium. This cyst was first reported by Parmentier in 1857 as hydatid cyst. Outside of the head and neck region, lymphoepithelial cyst is found most frequently in the pancreas and testis.

A similar but much larger cervical lymphoepithelial cyst (branchial cleft cyst) most probably develops from entrapped salivary duct epithelium in the lymph nodes of the lateral neck, rather than from the branchial cleft. Phylogenetically, the branchial apparatus is related to gill slits. In fish and amphibians, these structures are responsible for the development of the gills, hence the name branchial (branchia is Greek for gills). Another similar cyst, the parotid cyst, is found in major salivary glands, especially in AIDS patients, although it often lacks a surrounding lymphoid aggregate.

Many branchial cleft cysts are asymptomatic. They may become tender, enlarged, or inflamed, or they may develop abscesses, especially during periods of upper respiratory tract infection, due to the lymphoid tissue located beneath the epithelium. Spontaneous rupture of an abscessed branchial cleft cyst may result in a purulent draining sinus to the skin or the pharynx.

Depending on the size and the anatomical extension of the mass, local symptoms, such as dysphagia, dysphonia, dyspnea, and stridor, may occur.

No ethnic predilection has been reported for branchial cleft cysts.

No sexual predilection is recognized for branchial cleft cysts.

Branchial cleft cysts are congenital in nature, but they may not present clinically until later in life, usually by early adulthood. 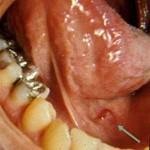 Oral lymphoepithelial cyst presents as a movable, painless submucosal nodule with a yellow or yellow-white discoloration. Occasional cysts are transparent. Almost all cases are less than 0.6 cm. in diameter at the time of diagnosis, which is usually during the teen years or the third decade of life. Approximately half of all intraoral examples are found on the oral floor, but the lateral and ventral tongue are not uncommon sites of occurrence, nor is the soft palate, especially the mucosa above the pharyngeal tonsil. Of course, this cyst may also occur within the pharyngeal tonsils themselves. Occasional superficial cysts rupture to release a foul-tasting, cheesy, keratinaceous material.

This cyst has a clinical appearance similar to that of an epidermoid cyst or a dermoid cyst of the oral/pharyngeal mucosa, but its growth potential is much less than the other cysts. The lymphoepithelial cyst never occurs on the alveolar mucosa, hence, can easily be distinguished from a gingival cyst of adults or from an unruptured parulis or “pus pocket” at the terminus of a fistula (extending from the apical or lateral region of an abscessed tooth).

The lymphoepithelial cyst is lined by atrophic and often degenerated stratified squamous epithelium, usually lacking in rete processes and usually demonstrating a minimal granular cell layer. Orthokeratin is seen to be sloughing from the epithelial surface into the cystic lumen, often completely filling the lumen and sometimes showing dystrophic calcification. Rarely, mucus-filled goblet cells may be seen within the superficial layers of the epithelium, and occasional cysts will demonstrate an epithelium-lined communication with the overlying mucosal surface. The cyst is entrapped within a well-demarcated aggregate of mature lymphocytes. The aggregate or “tonsil” will have a variable number of germinal centers, sometimes none at all. The lymphoid aggregate may be hyperplastic.

This combination of epithelium-lined cyst with lymphoid aggregates is unique enough to make the diagnosis an easy one, but the pathologist must differentiate this lesion from the Warthin tumor (papillary cystadenoma lymphomatosum). The latter lesion is lined not by squamous epithelium but by a bilayered cuboidal, columnar or oncocytic ductal epithelium. It is almost always found in the parotid gland, but rare oral examples have been reported.

Lymphoepithelial cyst at the neck

No treatment is usually necessary for the oral lymphoepithelial cyst unless its location is such that it is constantly being traumatized. Most lesions are, however, removed by conservative surgical excision in order to arrive at a definitive diagnosis. There is no malignant potential to this lesion but the lymphoid stroma, as with all lymphoid tissues, can become involved with an extranodal lymphoma.