The lateral periodontal cyst arises from some of tissue remnants of periodontal ligament. It is an uncommon type of cyst. It is considered to be developmental and not as a result of inflammation process or infection.Â  It is more common in middle-aged adult males.

They are generally asymptomatic and usually found incidentally on routine dental examination. There is no pain associated with it unless the cyst is infected.

The infected cyst would present as gum swelling, tendernessÂ  and pain at cyst area.

This cyst’s most frequent location is at the lower teeth region (canine and premolar region) and rarely can be found in the upper teeth region. The involved teeth are vital. 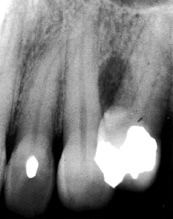 This cyst is generally an accidental radiographic finding. However, it appears as a well-defined round or oval uniform dark color on the side of a canine or premolar root. No bone loss seen and generally not exceeding 1 cm in diameter.

A lateral periodontal cyst has similar appearance to other conditions due to its location and radiographic appearance. In order to establish the proper diagnosis, the cyst must be ruled out clinically and histologically

The following should be considered in a differential diagnosis: a small odontogenic keratocyst, mental foramen, lateral radicular cyst.

The treatments of choice are excisional biopsy and enucleation. If possible, the affected tooth should be preserved, which some times it is difficult. A lateral periodontal cyst doesnâ€™t tend to recur.