It usually presents as a midline neck lump (in the region of the hyoid bone) that is usually painless, smooth and cystic, if infected pain can occur. There may be difficulty breathing, dysphagia (difficulty swallowing), and/or dyspepsia (discomfort in the upper abdomen), especially if the lump becomes large. 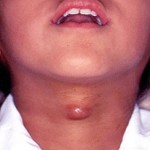 A thyroglossal cyst will move upwards with protrusion of the tongue.

Thyroglossal cysts are associated with an increased incidence of ectopic thyroid tissue. Occasionally, a lingual thyroid can be seen as a flattened strawberry-like lump at the base of the tongue.

The thyroglossal tract arises from the foramen cecum at the junction of the anterior two-thirds and posterior one-third of the tongue. Any part of the tract can persist causing a sinus, fistula or cyst. Most fistulae are acquired following rupture or incision of the infected thyroglossal cyst.

Thyroglossal duct cysts most often present with a palpable (able to be felt) asymptomatic midline neck mass below the level of the hyoid bone. The mass on the neck moves during swallowing or on protrusion of the tongue because of its attachment to the tongue via the tract of thyroid descent. Some patients will have neck or throat pain, or dysphagia.

The persistent duct or sinus can promote oral secretions, which may cause cysts to become infected. Up to half of thyroglossal cysts are not diagnosed until adult life. The tract can lie dormant for years or even decades until some kind of stimulus leads to cystic dilation. Infection can sometimes cause the transient appearance of a mass or enlargement of the cyst, at times with periodic recurrences. Spontaneous drainage may also occur. 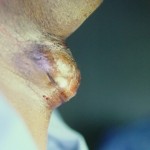 Clinical features can be found in the subhyoid portion of the tract and 75% present as midline swellings. The remainder can be found as far lateral as lateral tip of the hyoid bone.

Typically, the cyst will move upwards on protrusion of the tongue, given its attachment to the embryonic duct.

How is a thyroglossal duct cyst diagnosed? 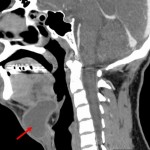 Specific treatment of a thyroglossal duct cyst will be determined by your child’s physician based on:

For a thyroglossal cyst is surgical resection, often requiring concomitant removal of the midsection of the hyoid bone (Sistrunk procedure), to prevent recurrence. Although generally benign the cyst will be removed if the patient exhibits difficulty in breathing or swallowing, or if the cyst is infected. Even if these symptoms are not present the cyst may be removed to eliminate the chance of infection or development of a carcinoma, or for cosmetic reasons if there is unsightly protrusion from the neck. 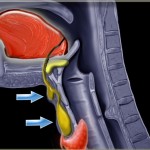 The Sistrunk procedure involves excision not only of the cyst but also of the path’s tract and branches. A removal of the central portion of the hyoid bone is indicated to ensure complete removal of the tract. It is unlikely that there will be a recurrence after such an operation. The original Sistrunk paper is available on-line with a modern commentary. At times antibiotics can be indicated if there is sign of infection.

Thyroid scans and thyroid function studies are ordered preoperatively; this is important to demonstrate that normally functioning thyroid tissue is in its usual area.