Whenever a lesion is observed on a radiograph, it must first be described in general terms before a differential diagnosis is attempted.Â  Is the lesion radiolucent, radiopaque, or mixed (combination of radiolucency and radiopacity)?Â  Where is the lesion located?Â  The apices of which teeth are involved?Â  What is the size of the lesion?Â  Is the margin of the lesion ill-defined, well-defined, or well-defined with a radiopaque border?Â  Is the appearance of the bone surrounding the lesion: normal, porous, or sclerotic? 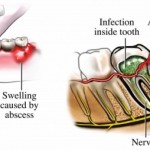 The most common pathologic conditions that involve teeth are the inflammatory lesions of the pulp and periapical areas.Â  Once inflammation (pulpitis) has spread from the dental pulp, it can produce a variety of apical pathologic changes, the most common of which are the periapical granuloma, radicular cyst, and apical abscess.Â  Various factors such as the host’s resistance and the virulence of the bacteria affect the local inflammatory response in the periapical area.Â  Without a microscopic diagnosis, a clinician is frequently unable to differentiate between a periapical granuloma, a radicular cyst, and an apical abscess.Â  Radiographic examination is inadequate in making a specific diagnosis. 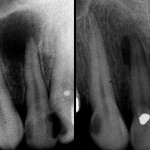 Radiolucent area around the tips of the roots indicates periradicular inflammation

Inflammatory periapical lesions have certain common clinical characteristics:Â  1) A history of painful pulpitis leading to the death of the pulp.Â  2) A nonvital reaction to electric pulp testing.Â  In a multirooted tooth where only one root is associated with the pulpo-periapical pathosis, the tooth will frequently give a vital reaction.Â  3) Presence of a deep carious lesion exposing the pulp or a restoration close to the pulp, or a fractured tooth and/or a discolored crown.Â  4) Destruction resulting in an interrupted lamina dura of the involved tooth.

A granuloma is formed from the successful attempt of the periapical tissues to neutralize and confine the irritating toxic products escaping from the root canal.Â  This low grade inflammation in the tissues continues to induce the proliferation of vascular granulation tissue.Â  A granuloma may evolve into a radicular cyst or an apical abscess.Â  Clinically, the lesion is usually asymptomatic but may sometimes exhibit mild pain and sensitivity to percussion.Â  The affected tooth is nonvital.Â  Radiographically granulomas form small welldefined radiolucencies.Â  They are the most common periapical lesions and constitute approximately 50% of all periapical radiolucent lesions.

Clinically, the lesion is usually asymptomatic but may sometimes exhibit mild pain and sensitivity to percussion.Â  The affected tooth is nonvital.Â  A radicular cyst may slowly enlarge and when large, may cause expansion of the cortical plates.Â  Radiographically, a radicular cyst forms a large well-definedÂ  radiolucency with or without a radiopaque (hyperostotic) border.Â  The more pronounced the hyperostotic (sclerotic) border, the more likely is the lesion to be a radicular cyst. Â It is the second most common periapical lesion and constitutes approximately 40% of all periapical radiolucent lesions.Â  (See also chapter on “Cysts of the Jaws”).

In approximately 90% of the cases, a well-defined radiolucency at the apex of an untreated asymptomatic tooth with a nonvital or diseased pulp is either a dental granuloma or a radicular cyst.Â  Their sizes are the differentiating features:Â  a granuloma is small whereas a radicular cyst is large.Â  In practice, however, it is not necessary to differentiate a periapical granuloma from a radicular cyst because both lesions respond quite well to conservative root canal therapy. 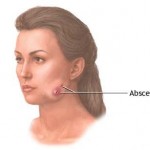 A tooth abscess can drain onto the cheeks when left untreated

An apical abscess, also called dental or dentoalveolar abscess, usually develops from a pulpo-periapical inflammatory condition.Â  In the acute stage, the onset of infection is so sudden that there is no radiographic evidence of an apical lesion.Â  An apical abscess can develop also from a pre-existing granuloma or cyst.Â  The associated tooth is nonvital, very painful, extremely sensitive to percussion, and often slightly extruded.Â  The patient will complain that the tooth feels “high” when it occludes with the opposing tooth.Â  The tooth will not respond to electrical pulp tests.Â  The application of ice will slightly relieve the pain but the application of heat will intensify pain.Â  The tooth may demonstrate increased mobility.Â  Radiographically apical abscesses form large radiolucencies with diffuse irregular borders.Â  They are the least common of the three pulpo-periapical lesions and constitute approximately 2% of all periapical radiolucent lesions.

If an apical abscess is permitted to progress without treatment, it may penetrate the cortical plate at the thinnest and closest part of the tooth apex and form a swelling in the adjacent soft tissues.Â  This infection site in the soft tissues is painful.Â  The skin or mucous surface over the abscess is warm and rubbery to palpation, and demonstrates fluctuance.Â  Once drainage is established by a sinus tract permitting the pus to drain to the surface, the tooth and associated swelling are no longer painful since the pain-producing pressure of the abscess is reduced.Â  The regional lymph nodes may be enlarged and painful.Â  The systemic temperature may be elevated.