Peripheral giant-cell granuloma (PGCG) is an oral pathologic condition that appears in the mouth as an overgrowth of tissue due to irritation or trauma. Because of its overwhelming incidence on the gingiva, the condition is associated with two other diseases, though not because they occur together. Instead, the three are associated with each other because they
appear frequently on gingiva and they also begin with the letter “p”: pyogenic granuloma and peripheral ossifying fibroma. Because of its similar microscopic appearance to the bony lesions called central giant-cell granulomas, peripheral giant-cell granulomas are considered by some researchers to be a soft tissue equivalent.

Peripheral giant cell granuloma is, for all practical purposes, a site-specific variant of pyogenic granuloma embedded with osteoclast-like multinucleated giant cells and arising exclusively from the periodontal ligament enclosing the root of a tooth. This unique origin, of course, means that such a lesion can only be found within or upon the gingiva or alveolar
ridge, no other site is acceptable. Called variously giant cell reparative granuloma, osteoclastoma, giant cell epulis, and myeloid
epulis, this lesion was first reported as fungus flesh in 1848. Almost half of all cases have lesional cells containing surface receptors for estrogen and this has led to speculation that some peripheral giant cell granulomas are responsive to hormonal influences.

There is a gender difference with 60% of the disease occurring in females. The prevalence of peripheral giant-cell granulomas is highest around 50 – 60 years of age. It appears only on the gingiva or on an edentulous (without teeth) alveolar ridge. It is more
often found in the mandible rather than the maxilla but can be found in either anterior or posterior areas. The underlying alveolar bone can be destroyed, leaving a unique appearance referred to as “cupping resorption” or “saucerization”.

Peripheral giant-cell granulomas appear microscopically as a large number of multinucleated giant cells, which can have up to dozens of nuclei. Mitotic activity is not unusual in the lesion and may even be pronounced in lesions developing in children and adolescents. Mitotic activity within the giant cells is, however, not seen and if present should be considered to be a sign of sarcomatous change. 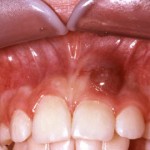 Additionally, there are mesenchymal cells that are ovoid and spindle-shaped.

Near the borders of the lesion, deposits of hemosiderin and hemorrhage are often found. Blood vessels within the lesional stroma show plump endothelial cell nuclei and scattered extravasation of erythrocytes is commonly seen. Dystrophic calcification may be
present as well.

Stromal cells may be spindled with a background of collagenic fibers, or may be rounded with a less fibrotic background. There may be occasional chronic inflammatory cells admixed with the mesenchymal cells or within surrounding fibrovascular
tissues. A thin band of routine fibrovascular tissue separates the lesion from the overlying epithelium, often with dilated veins and capillaries.

In 50% of cases, ulcerations are present. When surface ulceration is present, the ulcer bed consists of routine fibrinoid necrotic debris over granulation tissue.

Admixed throughout the stroma are numerous osteoclast-like multinucleated giant cells containing varying numbers of pale vesicular nuclei similar to those within the surrounding stromal cells. These cells have eosinophilic cytoplasm, which electron microscopy has shown to contain large numbers of mitochondria.Immunohistochemistry has shown the giant cells to be only slightly different from true osteoclasts. The origin of the multinucleated cells is still unknown, but they are assumed to arise from syncytial fusion of mononuclear preosteoclasts of bone marrow origin. 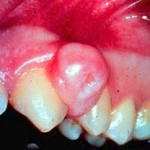 Peripheral giant cell granuloma can be differentiated from osteoblastic osteosarcoma by the uniformity of the stromal cells and by the lack of dysplasia in these cells. In young persons, however, numerous mitotic figures and active proliferation of stromal cells may make this distinction difficult. Peripheral giant cell granuloma may be indistinguishable from the rare extraosseous brown tumor of hyperparathyroidism.

Treatment usually involves surgical removal of the lesion down to the bone. If there are any adjacent teeth, they are cleaned thoroughly to remove any possible source of irritation. Recurrence is around 10%. Very large or recurring lesions may represent brown tumors of hyperparathyroidism and will require treatment of the underlying endocrine dysfunction prior to surgical removal.