Scattered radiation
X ray film is irradiated by – primary photons
scattered photons.
Produced mainly by compton effect
Leaves the radiograph with unwanted density without adding any patient information .
It is probably the biggest factor contributing to the poor diagnostic quality of radiographs.
Its effect produces a general radiographic fog on the film which reduces the contrast.

WHEN TO USE A GRID
When anatomic part to be radiographed is 10cm or greater in thickness.

OR
MORE THAN 60kvp is needed for examination.

They are composed of a large no. of parallel strips of lead that have precise height thickness & space between them.
held apart & parallel to each other by an X- ray transparent material. 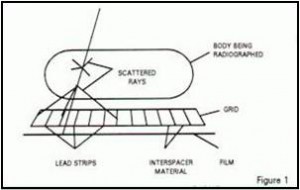 INTERSPACE MATERIAL
THE lead strips are held apart by & parallel by means of a thicker strip of suitable & this separating is the principal function of interspace material.
The grid structure is enveloped in a sealed ALUMINIUM container to protect it from HUMIDITY & MECHANICAL DAMAGE.
The interspace material between grid strips may be
– FIBRE: Transparent to x-ray
– PLASTIC: Transparent to x-ray
– ALUMINUM: Sturdy

VARIOUS SIZES
Grids are manufactured to accommodate all standard film sizes from 9×12 to 45×45 cm or 8″x10″ to 18″x18“
Customized grids to specifications are available upon request
Grids for use inside cassettes are 3 mm (1/8″) smaller than the corresponding film size, whereas grids for use outside the cassettes are approximately 20 mm (1″) larger than the corresponding film size
Extra large grids are made from two or more smaller sized grids that can be fitted together up to a maximum size of 49 cm x 49 cm (19″x19″) 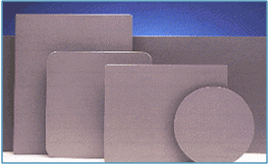 The strips — five hundred or two thousands or more of them — are set on edge, properly angled to a mean focal distance and separated by x-ray transparent interspacers.

The whole is bonded together into a single flat structure, suitably covered for strength, durability and protection against moisture.

Crossed.
The linear grid is made with the lengths of all its leads in the same direction.
THE over all size may be quite large since it has to cover the whole film area.

CROSSED GRID
The crossed grid is usually two linear grids, one on top of the other, with the leads of the top grid crossing those of the lower grid

When using crossed grid, x-ray beam must be perpendicular and no large amount of angulation to any direction

The advantage of the linear grid over the crossed grid is that it may be used in tilted-tube techniques without undue “cut-off” in the radiograph.
This is true with grid ratios 8:1 and lower and only if the angle of tilt of the tube is in a direction parallel to the length of the leads

GRID FOCUS
It refers to the orientation of of lead lines.
Accordingly –

The focused grid has its leads angled progressively in such a way that lines drawn through each lead and continued out of the grid will intersect at a point known as the grid focus.

It has the lead strips angulated towards the focal spot
their path coincides with the direction of the paths of diverging photons in the primary x-ray beam, there by accommodating their passage through the grids
there is no reduction in the primary towards the edge.