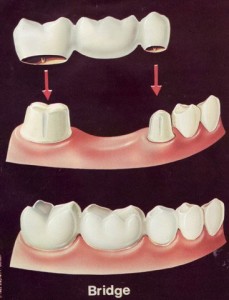 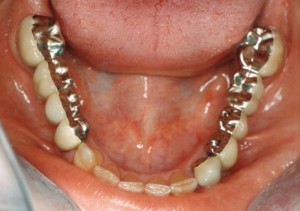 A bridge is a custom-made device anchored to neighboring natural teeth, which replaces one or more missing teeth. When a lost tooth is replaced with bridgework, the teeth on either side of the missing one are prepared as crowns to hold the bridge in place. Bridges, sometimes referred to as a fixed partial denture, look natural and literally bridge the gap where one or more teeth may have been. Fixed bridges appear and function similar to natural teeth.

INTRODUCTION:
DENTAL RESTORATIONS ,NO MATTER HOW CAREFULLY PLACED, MAY REQUIRE MODIFICATION OR
REPLACEMENT. THE ORIGINAL EVALUATION AND TREATMENT SHOULD HAVE ENSURED GOOD ABUTMENT SELECTION , CROWN PREPARATION WITH ADEQUATE MARGIN PLACEMENT, PONTIC DESIGN AND CORRECT OCCLUSION.Â  NO GUARANTEE CAN BE GIVEN CONCERNING THE LONGEVITY OF ANY PROSTHESIS .Â  PATIENTS SOMETIMES CAN PRESENT WITH ONE OF A NUMBER OF MAJOR PROBLEMS AFTER CROWNS OR FIXED PARTIAL DENTURES HAVE BEEN CEMENTED.