Midface dysplasia is a cardinal characteristic of persons with Down Syndrome (DS). Nose malformations including a flat broad bridge of the nose has been reported in 59-78% of these individuals. Ear malformations, including “lop” ears, low-set ears and ears with a flat or absent helix have been reported in 54%. Eye malformations are common. Epicanthal folds with slanting almond-shaped eyes (narrow palpebral tissue slanting toward the midline), which was responsible for the term mongoloid, are reported in 78%. Strabismus (cross eyes) is reported in 14-54% and nystagmus (constant involuntary cyclical movement of the eyeballs) and refractive errors are also common. The majority of persons with Down Syndrome exhibit brachycephaly (broad, short head) and lack of supraorbital ridges and hypotelerism (secondary to hypoplasia of the central face) are common findings. Absence of frontal sinuses and absent or reduced maxillary sinuses have been reported. Nasal septum or nasal conchal deviations are often observed which can produce a partially obstructed or narrow air passage and can contribute to the problem of mouth breathing. 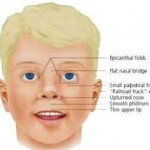 Facial characteristics of Down Syndrome patient

Although many of the earlier and classical studies reporting dental conditions in persons with Down Syndrome were institutional based and often poorly controlled, these findings have been consistently supported in more recent investigations.

However, a severe, early onset, often dramatic fulminating periodontal disease is a universal finding with an incidence of 90-96% in these individuals. It is common to see alveolar bone loss in persons with DS age 6-16 years. This increased incidence of periodontal disease is, therefore, not related to an increased amount of plaque or more virulent plaque; but thought to be directly related to the reduced immunologic response to infections and inflammatory disease reported in these individuals. The issue of ligamentous laxity/ degeneration may also play a part in the destruction of the periodontal ligament.

Periodontal condition of Down syndrome patients

This defect in host response has been reported in many controlled studies showing greater inflammation and cellular response occurring with equal plaque levels. The clinical course in individuals with DS is similar to juvenile periodontosis, except it is not isolated to a few teeth. Other evidence supports this issue of deficits in host response being responsible for the periodontal problems of persons with Down Syndrome. Several reports have indicated a high incidence of acute necrotizing ulcerative gingivitis (ANUG) in these individuals. One study showed 45% of institutional DS subjects versus 4% of the non DS/MR controls with evidence of ANUG.

This condition historically has been associated with alterations in host response, often stress related. Oral conditions associated with an increase in ANUG in these individuals were: crowded dentition (vs spacing), traumatic occlusion, peg shaped anterior teeth, lack of root resorption in primary teeth and incidence of high frenum attachment. The clinical picture of ANUG in persons with Down Syndrome differs from the usual symptoms in that fetid breath and exquisite pain are rarely reported.

Older studies reported a dramatically lower decay rate in the population with Down Syndrome compared with controls (53% caries free vs. 0.5% in controls). More recent studies continue to support the lower decay rate in persons with Down Syndrome, but the difference is shown to be far less than previously reported. Overall reduction in dental decay and controlling for eruption times may explain the differences in the earlier and more recent studies. Incidentally, the delay in eruption of permanent teeth has been reported as only 0.7 years. 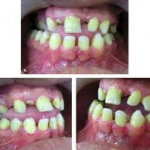 Malocclusion in Down syndrome patient

There is an increased incidence of malocclusion in individuals with DS, particularly Class III malocclusions. The higher incidence of Class III malocclusions is due to the underdevelopment of the midface (nasal, premaxillary and maxillary bones) not to prognathism. The increased incidence of all malocclusions has been reported as: Class III, 32-70%; Class II, 3-32%; posterior unilateral and bilateral cross bites, 71%; and open bites, 5%. Contrary to many medical reports, a high arched palate is not a characteristic of this population; the palatal height and shape is normal but the palate is relatively small in all dimensions including a decreased arch length and arch circumference.

Additional findings indicate more over retained primary teeth (especially primary cuspids and second molars), delayed eruption of permanent teeth, more impacted teeth (especially cuspids and bicuspids) and more variable tooth morphology (especially nippled cuspids and shovel shaped maxillary incisors). There is evidence reported that both crowns and roots, but especially roots, of permanent teeth in this population are shorter than normal, thus creating an unfavorable crown-root ratio. Increased taurodontism has also been reported in persons with Down Syndrome. Taurodontism together with abnormally short roots would reduce the extent of periodontal ligament attachment and would be expected to contribute to tooth mobility so commonly seen in these persons.