Acrocephalosyndactyly may be an autosomal dominant disorder. Males and females are affected equally; however research is yet to determine an exact cause. Nonetheless, almost all cases are sporadic, signifying fresh mutations or environmental insult to the genome. The offspring of a parent with Apert syndrome has a 50% chance of inheriting the condition. In 1995, A.O.M. Wilkie published a paper showing evidence that acrocephalosyndactyly is caused by a defect on the fibroblast growth factor receptor 2 gene, on chromosome 10. 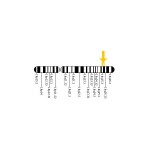 Location of mutation on chromosome 10

Apert syndrome is an autosomal dominant disorder; approximately two-thirds of the cases are due to a C to G mutation at the position 755 in the FGFR2 gene, which causes a Ser to Trp change in the protein. This is a male-specific mutation hotspot: in a study of 57 cases, the mutation always occurred on the paternally derived allele. On the basis of the observed birth prevalence of the disease (1 in 70,000), the apparent rate of C to G mutations at this site is about .00005, which is 200 to 800 fold higher than the usual rate for mutations at CG dinucleotides. Moreover, the incidence rises sharply with the age of the father. Goriely et al. (2003) analyzed the allelic distribution of mutations in sperm samples from men of different ages and concluded that the simplest explanation for the data is that the C to G mutation gives the cell an advantage in the male germline.

It still isnâ€™t very clear why people with Apert Syndrome both have craniosynostosis and syndactyly. There has been one study that suggests it has something to do with the expression of three isoforms of FGFR2, the gene with the point mutations that causes the syndrome in 98% of the patients. KFGR, keratinocyte growth factor receptor, is an isoform active in the metaphysis and interphalangeal joints. FGFR1 is an isoform active in the diaphysis. FGFR2-Bek is active in the metaphysis, as well as the diaphysis but also in the interdigital mesenchyme. The point mutation increases the ligand-dependent activation of FGFR2, and thus of its isoforms. This means that FGFR2 loses its specificity, causing binding of FGFâ€™s that normally donâ€™t bind to the receptor. Since FGF suppresses apoptosis, the interdigital mesenchyme is maintained. FGF also increases replication and differentiation of osteoblasts, thus early fusion of several sutures of the skull. This may explain why both symptoms are always found in Apert Syndrome.

Before and after Le Fort III surgery

Surgery is needed to prevent the closing of the coronal sutures from damaging brain development. In particular, the LeFort III or monobloc midface distraction osteogenesis which detaches the midface or the entire upper face, respectively, from the rest of the skull are performed in order to reposition it in the correct plane. These surgeries are performed by both plastic and oral and maxillofacial (OMS) surgeons, often in collaboration.

There is no standard treatment for the hand malformations in Apert due to the differences and severity in clinical manifestations in different patients. Every patient should therefore be individually approached and treated, aiming at an adequate balance between hand functionality and aesthetics. However, some guidelines can be given depending on the severity of the deformities. In general it is initially recommended to release the first and fourth interdigital spaces thus releasing the border rays. This makes it possible for the child to grasp things with its hand, a very important function for the child’s development. Later the second and third interdigital spaces have to be released. Because there are three handtypes in Apert, all with their own deformities, they all need a different approach regarding their treatment:

With growing of a child and respectively the hands, secondary revisions are needed to treat the contractures and to improve the aesthetics.