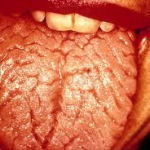 Fissured tongue and protruding tongue due to forward position of the mandible and open mouth is a common finding. Also, increases in bifid uvula and submucous clefts and cleft palates have been reported in this population.

Reports on the differences in parotid gland secretions are conflicting. Earlier studies showed parotid gland secretions with an elevated PH (alkaline saliva) and elevated sodium, calcium and bicarbonate levels which may contribute to the documented lower decay rate. More recent studies, however, have found no PH differences in the saliva of DS subjects compared with other MR subjects or the general population.

Many recent studies support the positive outcomes of partial glossectomies in persons with Down Syndrome with relative macroglossia. These positive outcomes include: less tongue protrusion, better speech and pronunciation (due to higher pitch with mouth closed)(45%), less upper respiratory tract infection (83%), increased ability to maintain a closed mouth (60%), better mastication and drinking, better self confidence and pleased parents (95%). The dentist may well be involved as a consultant on this issue. Similarly, there are reports on the positive outcomes of adenotonsillectomies in persons with Down Syndrome. These include: improvement in sleep apnea (83%), reduced mouth breathing (91%), reduced snoring and nasal drainage (75%). In absence of nasal obstruction, no improvement in tongue protrusion was noted.

Before and after cosmetic facial surgery in Down Syndrome patient

There is considerable controversy regarding the advantages and disadvantages of cosmetic surgery to reduce the stigma of Down Syndrome and to aid in social development. These procedures would include augmentation of the nasal, cheek and chin areas, glossectomies and lateral canthoplasty. Proponents, usually parents, support the surgery as a normalizing procedure. Opponents contend that the accompanying mental retardation is the main disability and cosmetic surgery is too radical and serious a procedure for the minor gains expected.

Early documentation of developing periodontal disease, especially bone loss and pocket formation, is important. It is quite unusual for most dentists to contemplate documentation of periodontal disease onset and advancement at such an early age (6-16). Yet when confronted by a parent or advocate at the time when extraction of a permanent tooth has been recommended for an 18 year old patient with Down Syndrome due to advanced bone loss, proper documentation of the disease progression and therapies attempted assumes greater importance for the dentist.

Early communication with parents/guardians regarding the limitations of dental care in preventing tooth loss and other dental sequela including prosthetic limitations is important. It is at this time that the responsibility for meticulous oral hygiene and the support and development of acceptable dental behaviors by the parents/caretakers can be emphasized. Early diet counseling can also be of benefit in preventing the obesity and other diet problems commonly encountered in this population.

It may be helpful to the clinician to employ a treatment approach to patients with Down Syndrome with actual or anticipated periodontal problems similar to the treatment approaches advocated for patients with acquired immunodeficiency syndrome (AIDS). That is, early aggressive, innovative, and often untried approaches based upon knowledge of the host response problems may prove fruitful in addressing these unusual conditions. Topical antimicrobial agents (e.g., peridexÂ®, ListerineÂ®) may be indicated on a long-term basis for these individuals. The ability of the individual to rinse and expectorate may be a limiting factor. Other delivery methods such as gels or sprays may be helpful.

Dentist with Down syndrome child patient

Systemic antimicrobial agents, particularly tetracycline may be helpful. Long term tetracycline therapy (10-30 years) is common in the field of dermatology, yet the ADA statement that “long term antibiotic use in dentistry is considered experimental” certainly creates a barrier for the dentist.

Early preventive periodontal therapy, including vestibular extensions, frenectomies and grafts should be considered. The major problem is the lack of data confirming the success of periodontal therapy in the presence of an altered immune or host response. Long term studies documenting the success or failure of such therapies should not be expected in the near future. Thus the clinician in consultation with the patients’ parents/guardians should rely on clinical judgement and reasonable expectations in recommending an early aggressive surgical approach. The dental cooperation of the patient is an important and limiting factor in this regard. Since host response is impaired and post surgical healing may be prolonged, the use of antibiotics following even minor surgical procedures may be indicated.

There is some evidence that some persons with Down Syndrome have a peripheral circulation problem with an abnormal capillary or vascular system which could affect the healing and success of autogenous gingival grafts. Early and aggressive therapy, where there is evidence of ANUG or similar dental papilla destroying periodontal disease, is important. Since over retained primary teeth are associated with increased ANUG and periodontal disease in these patients, close attention to extraction of primary teeth showing reduced root resorption rates should be considered.

Also, since crowded dentition is associated with increased periodontal problems, selected extraction of primary or permanent teeth or radical enameloplasty to create interdental spacing is another consideration. The use of bone grafts or bone replacement products (e.g. hydroxyapatite) may hold promise for future use. Aggressive and radical occlusal equilibration to reduce occlusal interferences and to reduce crown height producing a more favorable crown-root ratio, should be strongly considered. A flat plane occlusion may be helpful in overcoming the periodontal impact of Class III malocclusions and posterior cross bites. Early orthodontic intervention with palate expansion and cross bite correction may reduce subsequent adverse impact of expected malocclusion. Restoration of pegged shaped cuspids with cast or composite restorations may also contribute to improved periodontal health.

Prosthetic treatment choices can be very limited with this population. The existence of periodontal disease and tooth mobility can severely limit the choice of fixed or removable partial dentures. The lack of cooperation seen with many patients with Down Syndrome also renders these choices problematical.

Complete dentures are often not a viable treatment choice due to lack of retention (caused by severe periodontal disease), presence of severe class III jaw relationship and lack of cooperation by the patient. Relative lack of maxillary sinuses in some of these patients would theoretically aid in use of implant technology, however the issues of host response and patient cooperation usually preclude this treatment choice. It is imperative that the limitations of prosthetic replacement be fully explained to the parent/guardian early in the treatment planning stage, to prevent inappropriate expectations in this regard.