Peutz–Jeghers syndrome, also known as hereditary intestinal polyposis syndrome, is an autosomal dominant genetic disease characterized by the development of benign hamartomatous polyps in the gastrointestinal tract and hyperpigmented macules on the lips and oral mucosa. Peutz–Jeghers syndrome has an incidence of approximately 1 in 25,000 to 300,000 births. Peutz-Jeghers syndrome (PJS) is named after two doctors who first studied and described it in 1921. It is an association of three very specific conditions in any one person. 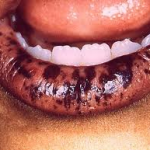 The main criteria for clinical diagnosis are:

Having 2 of the 3 listed clinical criteria indicates a positive diagnosis. The oral findings are consistent with other conditions, such as Addison’s disease and McCune-Albright syndrome, and these should be included in the differential diagnosis. 90-100% of patients with a clinical diagnosis of PJS have a mutation in the STK11/LKB1 gene. Molecular genetic testing for this mutation is available clinically.

Most patients will develop flat, brownish spots (melanotic macules) on the skin, especially on the lips and oral mucosa, during the first year of life, and a patient’s first bowel obstruction due to intussusception usually occurs between the ages of six and 18 years. The cumulative lifetime cancer risk begins to rise in middle age. Cumulative risks by age 70 for all cancers, gastrointestinal (GI) cancers, and pancreatic cancer are 85%, 57%, and 11%, respectively. 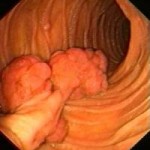 In 1998, a gene was found to be associated with the mutation. On chromosome 19, the gene known as STK11 (LKB1) is a possible tumor suppressor gene. It is inherited in an autosomal-dominant pattern which means that anyone who has PJS has a 50% chance of passing it onto their children, assuming that their spouse does not have the disease.

The risks associated with this syndrome include a strong tendency of developing cancer in multiple sites. While the hamartomatous polyps themselves only have a small malignant potential (<3% – OHCM), patients with the syndrome have an increased risk of developing carcinomas of the pancreas, liver, lungs, breast, ovaries, uterus, testicles and other organs.

The average age of first diagnosis is 23, but the lesions can be identified at birth by an astute pediatrician. Prior to puberty, the mucocutaneous lesions can be found on the palms and soles. Often the first presentation is as a bowel obstruction from an intussusception which is a common cause of mortality; an intussusception is a telescoping of one loop of bowel into another segment.

Some suggestions for surveillance for cancer include the following:

Follow-up care should be supervised by a physician familiar with Peutz–Jeghers syndrome. Genetic consultation and counseling as well as urological and gynecological consultations are often needed.

Persons with this condition should be monitored by a health care provider and be checked periodically for cancerous polyp changes.

There may be a significant risk of these polyps becoming cancerous. Some studies link PJS and cancers of the gastrointestinal tract, lung, breast, uterus, and ovaries.