1) The crowns used in the research presented here were Ni-Cro Primary Molar Crowns, cemented with AquaCem, both from
3M/ESPE. Any adjustment of the crowns was minimal, and was limited to re-molding the crown margins in some cases with orthodontic band forming pliers. No crown had the margin trimmed.

Arrow pointing towards lost marginal ridge, but without drifting of adjacent tooth yet

2) Fitting crowns to Ds where loss of the marginal ridge has allowed the E to drift mesially can be tricky. Use of separators is particularly helpful, and adjusting the shape of PMCs using band forming pliers has already been mentioned. Sometimes it helps if the PMC is rotated slightly, usually mesio-buccaly.

This example is a little extreme! Another solution is to place a temporary dressing of Polycarboxylate cement, which allows you to place a separator, so that you can then place a PMC next visit, in 3-5 days time.

3) Crowns will try to follow the path of least resistance, and so may tilt towards the â€œeasierâ€ of the contacts, making it almost impossible then to ease the crown through the tight contact.

Concentrate on seating the crown through the tight contact, and the easy one should take care of itself. If fitting a Hall
crown for the first time, try Es, rather than Ds.

Good occlusion must be achieved after seating the dental crown

4) If the crown does not seat sufficiently, then remove it using the excavator before the cement sets. Do not leave a child
with the bite propped open excessively! If the cement has set, a high speed handpiece can be used to section the crown through the buccal and occlusal surface, following which it can easily be peeled off.

5) Patients and parents should be reassured that the child will be used to the feeling within 24 hours. It is the authorsâ€™ experience that analgesia is not required. The occlusion tends to adjust to give even contact on both sides within weeks.

6) Patients should be reviewed on a normal recall schedule, and the Hall technique should be used in conjunction with a full
preventive programme.

7) If fitting crowns to Es, particularly maxillary Es, before the 6s are erupted (as seen in Picture 3), keep an eye out for the 6s becoming impacted against the crown margin as they erupt. This can occur even if crowns havenâ€™t been fitted, and there is no evidence from the authorsâ€™ clinical trial that there is an increased risk of this. Nevertheless, if it does occur, it can often be managed with orthodontic separators if detected early.

8) If a molar fitted with Hall crown becomes non-vital, a pulpotomy can be carried out through the crown without needing to remove it.

10) In the authorsâ€™ experience, it is usually not possible to fit a crown using the Hall

technique to a D and an E in the same quadrant at the same appointment; they will need to be fitted at separate appointments. In addition, directly occluding (opposing) Hall crowns should only be fitted once the bite has adjusted to the fitting of the first crown, with the second crown being fitted (usually) three months later. Attempting to fit opposing Hall crowns at the same appointment can prop open the bite beyond the level which a child can find comfortable. Fitting, say, both upper Es at the same appointment, rather than separate appointments, is a good idea (provided both Es needed Hall crowns!), as the bite will be more comfortable for the child, and the overall bite propping will probably be reduced. Similarly, the same will apply if fitting diametrically opposite crowns (an upper left E and a lower right E, for example). 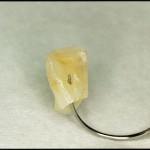 Worn dental crown can be restored with composite

11) Occasionally a crown will wear through occlusally. If this occurs, it can be repaired with composite material.

12) The Hall technique must not be used on teeth with either obvious pulpal involvement clinically, or with insufficient tooth tissue remaining to retain the crown. If the tooth is unrestorable by a conventionally fitted PMC, then it is probably not suitable for a Hall crown.