Human beings have two sets of teeth —- Primary (milk teeth) and Permanent. There are 20 primary and 32 permanent teeth. In some people one or more teeth may be absent, or they may have some extra teeth (supernumerary). Usually the first primary teeth erupt by 6 months and the first permanent by 6 years of age. Children loose their milk teeth between 6 and 11 years of age. By the age of 13 years almost all the permanent teeth have erupted: 8 incisors, 4 canines, 8 premolars and 12 molars. The last 4 molars commonly known as wisdom teeth appear much later, between 18 to 21 years. The main function of your teeth is to chew and cut food. Anterior teeth are used to bite and tear food while the posterior teeth help in chewing. Hence your dental health is an important part of your general health and your overall well-being. 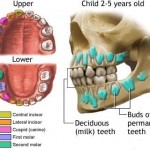 Sometimes the jaws are not large enough to accommodate the last molars. Theories postulate that in modern (more evolved) human beings the jaws are smaller and less developed than those of our prehistoric predecessors. The cooked and soft foods does not require big strong jaws to chew, unlike the uncooked fibrous foods eaten by prehistoric man. Theories also suggests that as the human race continues to develop and evolve, there will be some point in the future when human beings will no longer have wisdom teeth. In fact, even now in the general population some people don’t have wisdom teeth. 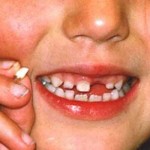 If the milk teeth are lost at an earlier age due to carries, trauma or any other cause, the permanents may get delayed to erupt into the oral cavity. The permanents erupt only when 1/2 to 1/3 of the roots of the tooth has been formed. Sometimes the gums may get fibrosed or thick if the deciduous are lost early and may require surgical intervention for the normal eruption of the permanent teeth. Supernumerary (extra tooth) are common in between the upper centrals (mesiodens). This will require earlier extraction to allow proper positioning and normal eruption of the centrals.

When the permanent lower or upper centrals erupt by 6 years it is common for them to erupt inside the deciduous incisors. Later they get pushed out into the arch. Sometimes the upper permanent incisors may get locked behind the lower permanent incisors. This will require interceptive orthodontics to bring the upper incisors into normal occlusion (bite). Interceptive orthodontics may also be required if the child has mouth breathing, thumb sucking or tongue thrusting. Serial extractions may be done to prevent proclination of teeth. In many cases after all the care taken the teeth may erupt misaligned (crooked) and will require orthodontic correction after all the permanents have erupted (12 – 13 years), for a beautiful smile.

A type of orthodontic appliance for children