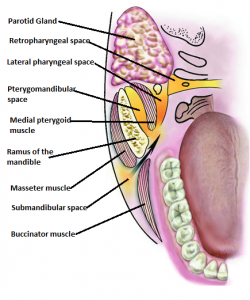 What is the difference between abscess and cellulitis?

An abscess is a localized collection of pus which feels hard if small, tense or covered by a thick layer of tissues. If large it may be softer and exhibit fluctuance (movement or sway in a rising and falling or wavelike pattern). Pointing to the skin or mucosa indicates mouth abscess formation.

Cellulitis is a rapidly spreading inflammation of the soft tissues particularly associated with streptococcal infections. It is not well-localized, brawny swelling in contrast to a circumscribed abscess in mouth, and the rapid spread is most likely related to the release of large amounts of streptokinase and hyaluronidase which are produced by most strains of streptococci. 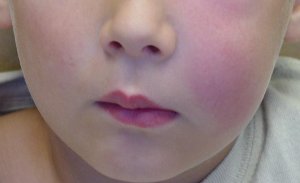 Clinically, there is diffuse, tense, painful swelling of the involved soft tissues usually associated with physical discomfort and an elevated temperature. Much of the swelling is due to inflammatory edema; pus discharge and abscess formation occur later if treatment is neglected or delayed. Cellulitis associated with upper teeth initially involves the upper half of the face. Extension towards the eye is a potentially serious complication because of the risk of cavernous sinus thrombosis as a result of infection involving veins at the inner canthus of the eye which communicate with the cavernous sinus.

Cellulitits associated with lower teeth initially involves the lower half of the face; extension into the submandibular and cervical tissues may cause respiratory embarrassment. Cellulitis spreading into the deeper surgical spaces usually presents clinically as pain and difficulty in opening the mouth rather than facial swelling.

What is cavernous sinus thrombosis?

Thrombosis (formation or presence of a clot of coagulated blood attached at the site of its formation in a bloodÂ vessel) of the cavernous sinus is a serious life threatening condition. It follows spread of odontogenic infection along two main venous pathways. Bacteria and the infected clot travel towards the back from the upper lip and face via the anterior facial vein. Alternatively infection may spread from the pterygoid space via the pterygoid plexus of veins. In addition to treatment the for infection, thrombosis requires anticoagulation. The mortality rate is high.

Local features are seen on one side at first but the signs become both sides as the thrombus or clot grows. Local effects include marked swelling of the eyelids, pulsating protrusion of the eyeball from the socket, a dilated facial vein, restriction of movement of the eyeball, and bleeding in the retina. Systemic effects include rapid pulse, marked fever and severe physical discomfort. 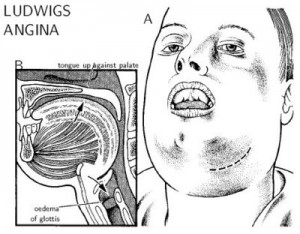 Ludwigâ€™s angina is severe cellulitis involving the submandibular, sublingual and submental space on both sides of the face, usually as a result of initial involvement of the submandibular space. Since the advent of antibiotics it is now rare.

The diffuse cellulitis produces a board-like swelling of the floor of the mouth, the tongue being elevated and displaced towards the back. As a result there is difficulty in opening the mouth, eating, swallowing and breathing. The latter is exacerbated as infection tracks backwards to involve the pharynx and larynx. Edema of the glottis may occur with risk of death by suffocation. This condition requires immediate management, drainage of abscess and aggressive antibiotic therapy.