In less than three minutes, DERMABOND adhesive provides the strength of healed tissue at 7 days. A strong, flexible 3-dimensional bond makes it suitable for use in closing easily approximated incisions of many types (exampleâ€”deep, short, long). 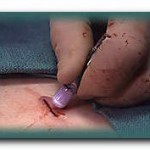 DERMABOND adhesive is approved to protect wounds and incisions from common microbes that can lead to infection. For trauma and post-surgical patients, infections are often the most common, and in some cases, the most serious complications. DERMABOND adhesive helps protect against the penetration of bacteria commonly associated with surgical site infections. In vitro studies demonstrated that DERMABOND acts as a barrier against Staphylococcus epidermidis, Staphylococcus aureus, Escherichia coli, Pseudomonas aeruginosa and Enterococcus faecium as long as the adhesive film remains intact.

In addition to its surgical adhesive indication, the FDA granted approval in January 2001 for Dermabond to be used as a barrier against common bacterial microbes including certain staphylococci, pseudomonads, and Escherichia coli.

In a prospective, randomized, controlled, unmasked study of 818 patients, DERMABOND adhesive provided cosmesis equivalent to that of sutures. At 3 months, it produced optimal cosmesis in 80% of patients, using the Modified Hollander Cosmesis Scale.

In most cases, DERMABOND adhesive allows for significantly faster closure than sutures.

DERMABOND adhesive is intended for topical application only to hold closed easily approximated skin edges of wounds from surgical incisions, including punctures from minimally invasive surgery, and simple, thoroughly cleansed, trauma-induced lacerations. DERMABOND adhesive may be used in conjunction with, but not in place of, deep dermal sutures. Topical skin adhesives are not appropriate for closing wounds that are subject to significant static or dynamic tensions unless deep sutures,
immobilization, or both are also used. 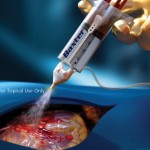 Staples provide a fast method for wound closure and have been associated with decreased wound infection rates. Staples are composed of stainless steel, which has been shown to be less reactive than traditional suturing material. The act of stapling
requires minimal skin penetration, and, thus, fewer microorganisms are carried into the lower skin layers. Staples are more expensive than traditional sutures and also require great care in placement, especially in ensuring the eversion of wound edges. However, with proper placement, resultant scar formation is cosmetically equivalent to that of other techniques.