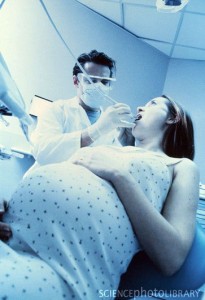 Dental treatment is best carried out during the second trimester, but advanced restorative procedures are probably best postponed until the state of the gums improves after giving birth and prolonged sessions of treatment are better tolerated. In the second and third trimesters the fetus is growing and maturing but can still be affected by infections, drugs and possibly other factors. In the third trimester the supine hypotension syndrome may result if the pregnant woman is laid flat. The person should therefore be put on one side to allow blood return to recover. Some pregnant women also have a hypersensitive gag reflex. Elective dental care should be avoided in the last month of pregnancy, as it is uncomfortable for the patient. Moreover premature labor or even abortion may also be attributed, without justification, to dental treatment.

Routine dental treatment of pregnant women under local anesthesia, for example extraction of teeth, is safe from the second trimester onwards but unnecessary drugs should be avoided.

Sedation with diazepam or midazolam are particular hazards and must be avoided in the first trimester and in the last month of the third trimester of pregnancy. Nitrous oxide, though able to interfere with vitamin B12 and folate metabolism, does not appear to be teratogenic (Of or relating to substances or agents that can interfere with normal embryonic development) though it is advisable to:

When general anesthesia is unavoidable but there is a mishap to the fetus, the mother is likely to blame the anesthetist, even though this may be quite unjustifiable. Yet another hazard is a greater tendency to vomiting during induction in the third trimester. Despite such considerations, there is scanty evidence of teratogenic effects in humans from exposure to general anesthetic agents. The greater risk is late to pregnancy when general anesthesia may induce respiratory depression in the fetus. As always the anesthesia must be given in hospital.

Drugs may be teratogenic and should therefore be avoided where possible, especially in the first trimester. Many women are unaware of being pregnant in the early part of the first trimester and therefore it is preferable for women of childbearing age to avoid taking any drugs, unless absolutely essential.

Nevertheless, despite the existence of a few disastrous exceptions, notable thalidomide and some retinoids, very few drugs have been proven to be teratogenic for humans. Aspirin and other NSAIDs may cause closure of the ductus arteriosus in the uterus, and fetal pulmonary hypertension as well as delaying or prolonging labor and therefore are contraindicated in the third trimester. Aspirin, in addition, causes a platelet defect and may induce abortion and is best avoided throughout pregnancy. Corticosteroids can suppress fetal adrenals and if taken, a steroid cover is needed for labor. 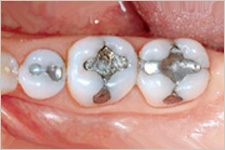 Extensive research has failed to establish any links between amalgam use and systemic disease. Most experts do not believe that the levels of mercury exposure are of any general health significance. Amalgam restorations release mercury vapor when teeth are chewed on or brushed or the restorations are removed. Some of the mercury vapor is inhaled and some dissolve in saliva and is swallowed but most mercury entering the body is excreted. A small amount accumulates in the kidneys and also to a very much lesser extent, in brains, lung, liver and gastrointestinal tract.

Mercury can cross the placenta to the fetus and can also be detected in breast milk but there is no evidence of any link between amalgam use and birth defects or still births. Generally it is wise to minimize any health interventions during pregnancy and though there is no reason to think that the placement or removal of amalgam during pregnancy is harmful, it may be prudent, where clinically reasonable, to avoid this during pregnancy.

Radiography should be avoided, especially in the first trimester, even though dental radiography is unlikely to be a significant risk unless the beam is directed to the fetus. When an apron is used in dental radiography, gonadal and fetal exposure is negligible. It has been estimated that two periapical dental X-rays give an exposure less than that due to natural radiation for 1 day. Nevertheless, of radiography is essential, patients must wear a lead apron and exposure must be minimal. MRI (magnetic resonance imaging) is best avoided during the first trimester.

Since drugs may pass in the breast milk from mother to fetus, care should be taken in their use. Drugs should preferably be taken by the mother immediately after breast feeding, so that milk levels of the drug is low as possible at the next feed. Cephalexin is a useful antimicrobial as it is not secreted in the milk. Fluoride passes into breast milk and of the local water supply contains more than 1 mg/l fluoride, supplements are not indicated for the breast-fed infant.