Taste budsÂ contain the receptors for taste. They are located around the small structures on the upper surface of theÂ tongue,Â soft palate, upperÂ esophagusÂ andÂ epiglottis, which are called papillae.Â These structures are involved in detecting the five (known) elements of taste perception:Â salty,Â sour,Â bitter,Â sweet, andÂ umami. Via small openings in the tongue epithelium, called taste pores, parts of the food dissolved inÂ salivaÂ come into contact withÂ taste receptors. These are located on top of theÂ taste receptor cellsÂ that constitute the taste buds. The taste receptor cells send information detected by clusters of various receptors and ion channels to the gustatory areas of the brain via the seventh, ninth and tenth cranial nerves. 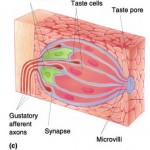 The majority of taste buds on the tongue sit on raised protrusions of the tongue surface called papillae. There are four types of papillae present in the human tongue:

It is generally accepted that there are five taste sensations:

Localization of taste and the specious “tongue map” 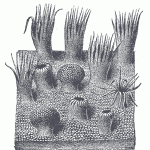 Types of papillae on the tongue

Identifying tastes is your brain’s way of telling you about what’s going into your mouth, and in some cases, keeping you safe.

Have you ever taken a drink of milk that tasted ‘funny’?
When the milk hit the taste buds, they send nerve impulses to your brain: “Milk coming in – and it tastes funny!”
Once your brain unscrambled the nerve impulses, it recognized the taste as a dangerous one, and you knew not to drink the milk.

Some things can make your taste bud receptors less sensitive, like cold foods or drinks.
An ice pop made from your favorite juice won’t taste as sweet as plain juice.
If you suck on an ice cube before you eat a food you don’t like, you won’t notice the bad taste.

Each taste bud is flask-like in shape, its broad base resting on theÂ corium, and its neck opening, theÂ gustatoryÂ pore, between the cells of the epithelium.

The bud is formed by two kinds of cells: supporting cells and gustatory cells.

TheÂ supporting (sustentacular) cellsÂ are mostly arranged like the staves of a cask, and form an outer envelope for the bud. Some, however, are found in the interior of the bud between the gustatory cells.

TheÂ gustatory (taste) cells, aÂ chemoreceptor, occupy the central portion of the bud; they are spindle-shaped, and each possesses a large spherical nucleus near the middle of the cell. 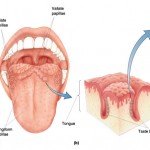 The peripheral end of the cell terminates at the gustatory pore in a fine hair filament, the gustatory hair. Some early experimental studies (Kirk and Grills, 1992)it was shown that subjects who were genetically predisposed to baldness were found to be 78% more likely to experience taste loss sensations in 5 out of 5 taste trials.It was hypothesized that this was due to ‘balding’ of the tongue.

The central process passes toward the deep extremity of the bud, and there ends in single orÂ bifurcatedÂ varicosities.

The average life of a taste bud is 10 days.

1 thought on “Types of papillae on tongue”