Ever wonder why you crave pickles or coconut or a ham sandwich? Chocolate and ice cream cravings make sense to many of us because they taste so good. But that’s not the only reason! We all experience cravings, some more than others. If you start to pay attention and maybe even keep a food diary, you can sometimes recognize patterns. Cravings can be emotional, but a lot of times they are your body’s way of demanding a certain nutrient. That’s why it’s important not to deny your cravings, but to figure out what they mean and how to meet them in a healthy way.

The tongue scraper is a "U" shaped stainless steel utensil

The tongue scraper is an inexpensive yet transformational tool which dentists are recommending more and more because it helps to fight cavities by removing bacteria from the mouth. Scraping your tongue also prevents bad breath, especially for people who eat a lot of dairy and build up mucus in the mouth, nose and throat.

The tongue scraper is a “U” shaped stainless steel utensil that has blunted edges. Tongue scraping comes from the tradition of Ayurveda, which asserts that people who use a tongue scraper are better at public speaking, express themselves more thoughtfully, and speak more sincerely and authoritatively. Ayurveda is an intricate medical system of healing that originated in India thousands of years ago. Some people ask if the same effect can be gained by brushing the tongue with a stiff toothbrush. Brushing the tongue moves stuff around and is helpful, but a tongue scraper is more effective as it clears out the deep deposits and generally keeps the area cleaner, stimulated and alive. 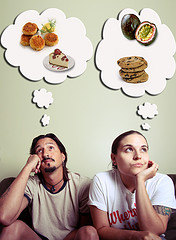 Cravings can be emotional, but a lot of times they are your body's way of demanding a certain nutrient

The theory is that using a tooth brush will clean the teeth but will not actually remove all the bacteria in the mouth. The tongue has a coating of millions of organisms. When we swallow soft foods, not all of what we consume goes down our throats. A portion of the debris and microorganisms remain on the surface of the tongue. This creates a potential site for lots of bacteria to grow! Especially during our sleep, the tongue is coated with a plaque film of bacteria and other odor causing compounds. Remove the cause of the problem rather than just treating the symptoms with mouthwash and breath aids is much better.

By gently scraping this coating off first thing in the morning you avoid reabsorbing these toxins. Also, when the surroundings around the salivary glands are cleaned, digestion improves. Digestion actually begins in the mouth as saliva mixes with food and begins to break it down. Cravings can be reduced by scraping the tongue of leftover food. When the mouth can still taste the food, you may end up experiencing cravings for foods previously eaten. A tongue scraper also reverses the process of desensitizing your taste buds, which happens to everyone to a greater or lesser extent as we age. When old residue is removed from your tongue it allows you to taste more subtle flavors in food, making the experience ofÂ  eating healthy foods like fruit, vegetables and whole grains, more enjoyable. When you start adding in whole foods you’ll crowd out those other less healthy cravings. Also, when old residue is removed from the tongue, you will be better able to taste your food and wonâ€™t need to eat as much since you will have gained greater satisfaction from your meal.

How To Use A Tongue Scraper 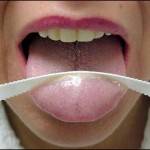 Scrape forward several times, making sure you've covered all the surface of your tongue

After brushing and flossing your teeth, gently place the tongue scraper as far back on your tongue as you comfortably can (without gagging of course!) and scrape forward several times, making sure you have covered all the surface area and sides of your tongue. Continue scraping until there is no white residue left on the scraper and remember to rinse it thoroughly under hot water. If you are wondering about those bumps on the back of your tongue, they are your salivary glands and they are supposed to be there. If you have found them, you have gone too far!

You can purchase your tongue scraper at your local pharmacy, health food store or at Whole Foods. Now there seems to be a variety of types on the market other than the U shaped tongue scraper that I have mentioned earlier. They are very inexpensive so try a few different types and see what is best for you.