The complications of lower third molar surgery are well documented. Almost all patients experience some pain, swelling and difficulty in mouth opening after operation. Temporary or permanent iatrogenic nerve damage is not uncommon. Despite these complications, the removal of third molars associated with disease is generally justified, but not if the teeth are pathology free since the risk of future disease is low and impossible to quantify accurately for individual patients.

Anatomy of a nerve in humans

Decision analyses of the risks and benefits of prophylactic removal have concluded that prophylactic surgical extraction is not in patients’ best interests. Nerve damage resulting in lingual and/or labial paraesthesia or anaesthesia is perceived as particularly debilitating by patients. From such studies the surgical outcomes considered to reduce health to the greatest degree included nerve damage causing permanent anaesthesia of the lip, tongue, or both lip and tongue. Decision analyses have also shown that prophylactic lower third molar removal is unwarranted both on the basis of patient derived utilities and those derived from oral surgeons. 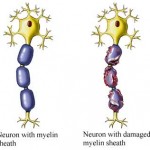 A first-degree injury or neurapraxia involves a temporary conduction block with demyelination of the nerve at the site of injury. Electrodiagnostic study results are normal above and below the level of injury, and no denervation muscle changes are present. No Tinel sign is present. Once the nerve has remyelinated at that area, complete recovery occurs. Recovery may take up to 12 weeks.

A second-degree injury or axonotmesis results from a more severe trauma or compression. This causes wallerian degeneration distal to the level of injury and proximal axonal degeneration to at least the next node of Ranvier.In more severe traumatic injuries, the proximal degeneration may extend beyond the next node of Ranvier. Electrodiagnostic studies demonstrate denervation changes in the affected muscles, and in cases of reinnervation, motor unit potentials (MUPs) are present. Axonal regeneration occurs at the rate of 1 mm/d or 1 in/mo and can be monitored with an advancing Tinel sign. The endoneurial tubes remain intact, and therefore, recovery is complete with axons reinnervating their original motor and sensory targets.

A third-degree injury was introduced by Sunderland to describe an injury more severe than second-degree injury. Similar to a second-degree injury, wallerian degeneration occurs, and electrodiagnostic studies demonstrate denervation changes with fibrillations in the affected muscles. In cases of reinnervation, MUPs are present. Regeneration occurs at 1 mm/d, and progress may be monitored with an advancing Tinel sign. However, with the increased severity of the injury, the endoneurial tubes are not intact, and regenerating axons therefore may not reinnervate their original motor and sensory targets.

The pattern of recovery is mixed and incomplete. Reinnervation occurs only if sensory fibers reach their sensory end organs and motor fibers reach their muscle targets. Even within a sensory nerve, recovery can be mismatched if sensory fibers reinnervate a different sensory area within the nerve’s sensory distribution. If the muscle target is a long distance from the site of injury, nerve regeneration may occur, but the muscle may not be completely reinnervated because of the long period of denervation.

A fourth-degree injury results in a large area of scar at the site of nerve injury and precludes any axons from advancing distal to the level of nerve injury. Electrodiagnostic studies reveal denervation changes in the affected muscles, and no MUPs are present. A Tinel sign is noted at the level of the injury, but it does not advance beyond that level. No improvement in function is noted, and the patient requires surgery to restore neural continuity, thus permitting axonal regeneration and motor and sensory reinnervation.

A sixth-degree injury was introduced by Mackinnon to describe a mixed nerve injury that combines the other degrees of injury.This commonly occurs when some fascicles of the nerve are working normally while other fascicles may be recovering, and other fascicles may require surgical intervention to permit axonal regeneration.