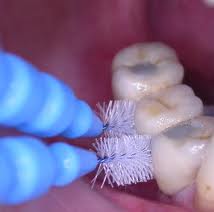 Small inter-dental (between teeth or inter-proximal) brushes which are attached to a handle come in a variety of designs. Some of the designs have a non-replaceable brush whereby the entire device is discarded when the brush is worn.

Interdental brushes can be utilized to clean spaces between teeth and around exposed root areas, orthodontic bands, and fixed prosthetic appliances with spaces that are large enough to easily receive the device. They may also be used to apply chemotherapeutic agents into areas between teeth as well as exposed molar roots. Foam tips initially developed for use with implants are an ideal mechanism for delivery of medicaments.

Interdental brushes are preferable to the use of dental floss for cleaning between teeth where the gum does not fill the space between teeth or where root concavities are present. The brushes are tapered or cylindrical in shape and are available in a variety of sizes. The core of the brush that holds the bristles is made of plastic, wire, or nylon-coated wire.

When determining the appropriate size of interdental brushes, the diameter of the bristles should be slightly larger than the space to be cleaned. The brush can be moistened, and then inserted into the area at an angle approximating the normal gums contour. An outer to inner movement is used to remove plaque and debris. Caution should be exercised to prevent damage to the tooth or soft tissues from the firm wire or plastic core of the brush. Implant abutments are easily cleaned with a interdental brush however; extreme caution should be exercised to prevent scratching of the titanium surface. Only plastic coated wires are recommended for use on implants. Foam brushes can also be utilized for this purpose.

The uni-tufted brush, also known as the single-tufted brush, is efficient for removing plaque in numerous sites .These include the following:

The end of the tuft is directed into the area between teeth by combining a rotating motion with intermittent pressure. The uni-tuft brush has also been suggested for application of chemotherapeutic agents. By softening in very hot or boiling water, handles of some uni-tufted brushes can be bent in order to allow easier access to difficult to reach areas. 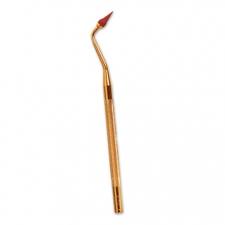 These inter-dental devices consist of a conical, flexible rubber or plastic tip attached to a handle or to the end of from exposed root areas, open spaces in between teeth, and along the gumline.

The tip is placed at a 90-degree angle to the long axis of the tooth and traced with moderate pressure along the gumline. In open areas in between teeth, the tip is moved in and out in an outer-to-inner direction. The use of a tip attached to an angled shank rather than a toothbrush handle may allow for greater ease of access and adaptation. Primarily utilized for gums massage, they can be used to remove plaque and debris. Care should be taken to avoid inserting the tip into the gum pockets.

In areas where the gums have receded and the space between teeth is open, white knitting yarn, with no dyes, can be used in place of floss for inter-dental cleaning. Wool yarns should be avoided because of the possibility of tissue irritation. The rationale for use of yarn is that the increased thickness and texture can enhance plaque removal.

When access is limited, a floss threader may be used to insert the yarn into the open space. Once the yarn has been drawn through the space between teeth, the technique is the same as for dental floss, taking care not to traumatize the tissue. Care should be taken as yarn may catch on dental appliances and become stuck if appliances are rough.

A gauze strip can be used for cleaning the inter-dental surfaces of teeth adjacent to toothless areas, teeth that are widely spaced, or implant abutments. To prepare the strip, a 2-inch-wide gauze bandage is unfolded and refolded lengthwise. The lengthwise edge of the gauze is positioned with the fold toward the gums and the ends folded inward to avoid irritation to the gums. The gauze is adapted by wrapping it around the exposed proximal surface to the front and inner line angles of the tooth. An outer-to-inner “shoeshine” stroke is used to loosen and remove plaque and debris.

Gauze strips are recommended to clean the back surface of the furthermost tooth in the mouth. It is particularly beneficial for an area where plaque accumulation is frequently abundant and thick. As with yarn, gauze may catch on rough surfaces of dental appliances and become stuck therefore care must be taken with use.