What are the principles of treatment for oral cancer? 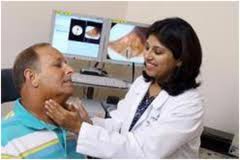 Individuals with oral cancer often present too late for cure and some may not benefit from treatment. Three treatment options are possible:

If cure is attempted, the highest chances of success are given by multimodality treatment â€“ a combination of surgery, radiotherapy, and more rarely, chemotherapy. The most aggressive treatment that the individual is able to withstand will be recommended because if the first round of treatment fails, the chances of survival are much reduced.

What are the factors influencing treatment?

What are the treatment options available for oral cancer?

The aim of surgery is to excise the cancer with the largest possible margin. At other body sites it is usual to attempt to excise a malignant tumor by about three centimeters. This is rarely possible in the head and neck and margins of only a few millimeters are usual if the lesion is large. Larger margins may be possible but only at a cost of reduced function and deformity. The head and neck contain many important structures and although many can be sacrificed and/or reconstructed, the resulting quality of life may be unacceptable. In some cases surgery is palliative, designed to remove the bulk of the lesion in order to reduce the symptoms arising from it.

Laser is useful in treating pre-cancerous lesions and early squamous cell carcinomas. This involves injection of a photosensitizing agent and illumination with a specific waveband non-thermal laser after a set time interval which causes tumor and tissue destruction by several different means. Defect heal surprisingly well by secondary intention.

Chemotherapy is the use of chemicals (drugs) to destroy cancer cells. Chemotherapy works by interfering with the cancer cellâ€™s ability to grow. It has the ability to treat widespread (metastatic) cancer that is in more than one location in patientâ€™s body. This ability makes chemotherapy very important in a patientâ€™s fight to overcome cancer, because radiation therapy and surgery are only suitable for treating cancer in localized areas.

What are the complications of oral cancer treatment?

What is the chance of cure for oral cancer?

In general the 5 year survival rate for oral cancer is poor. This is because of late presentation, leading to large cancers on findings, often with extensive lymph node and distant spread to other parts of the body. In addition, many patients are medically compromised by lifetime of heavy smoking and excessive alcohol intake or are elderly and infirm and cannot accept aggressive treatment.

However, this does not mean that extensive combination therapy and reconstruction is pointless in those with advanced cancers. Attempted surgical cure which alleviates local disease and symptoms and allows the patient a few more years of life and gradual demise is still worthwhile.