ACTINIC KERATOSIS (CHEILITIS)
Also known as solar keratosis
Premalignant epithelial lesion directly related to long-term sun exposure
Classically seen on the vermilion border of the lower lip as well as on other sun-exposed areas of the skin
10% of these will transform into squamous cell carcinoma
Biopsies should be performed on lesions that repeatedly ulcerate, crust over, or show a thickened white area
Seen in individuals with extensive sun exposure and/or fair complexions

Clinical features:
May be seen on the skin of the forehead, cheeks, ears and forearms
On the lip, it appears as a white plaque, oval to linear in shape, usually measuring < 1cm in size
Surface may be crusted and rough to touch 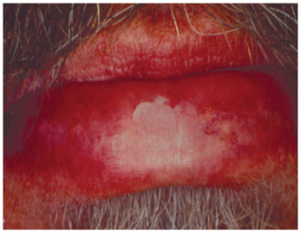 Treatment:
Mainstay is surgery
Chemotherapeutic agents such as topical 5-fluorouracil have been used with some success, but, follow-up biopsies showed that the dysplastic changes persist in clinically healthy-appearing epithelium. Hence long term follow-up is recommended in non-surgically treated cases.

SMOKELESS TOBACCO-INDUCED KERATOSIS
Also called smokeless tobacco keratosis, snuff dipper’s keratosis, or tobacco pouch keratosis
Habitual chewing of tobacco leaves or dipping snuff results in the development of a well-recognized white mucosal lesion in the area of tobacco contact
Accepted as precancerous lesions
Different from true leukoplakia
Lower risk of malignant transformation
Habit usually starts between 9 and 15 years of age
Smokeless tobacco contains several known carcinogens including N-Nitrosonornicotine (NNN) which has been proven to cause mucosal alterations
Chewing tobacco- risk factor in development of root surface and coronal caries which may be due to high sugar content & association with increased amounts of gingival recession
Duration of exposure is very important (Leukoplakia develops with use of as little as 3 cans of snuff per week for more than 3 years)
Snuff appears to be much more likely to cause mucosal change when compared to chewing tobacco

Clinical features:
Lesion seen in the area contacting the tobacco
Most commonly, the anterior mandibular vestibule followed by the posterior vestibule is involved
Surface appears white and is granular or wrinkled; in some cases a folded character may be seen (tobacco pouch keratosis)
Characteristic area of gingival recession with periodontal-tissue destruction in the immediate area of contact is seen which involves the facial aspect of the tooth or teeth and is related to the amount and duration of tobacco use
Mucosa appears gray or gray-white & almost translucent
During examination, the usually stretched mucosa appears fissured or rippled, and a “pouch” is usually present
This white pouch may become leathery or nodular in long-term heavy users.
Rarely an erythroplakic component may be seen
Usually asymptomatic

Treatment:
Cessation of use almost always leads to a normal mucosal appearance within 1 to 2 weeks
Biopsy done for lesions that remain after 1 month
Biopsy indicated for lesions that appear clinically atypical and that include such features as surface ulceration, erythroplakia, intense whiteness, or a verrucoid or papillary surface
Risk of malignant transformation is increased fourfold for chronic smokeless tobacco users

NICOTINE STOMATITIS
Also called stomatitis nicotina palati, smoker’s palate
Specific white lesion that occurs on the hard and soft palate in heavy cigarette, pipe, and cigar smokers
Restricted to areas that are exposed to a relatively concentrated amount of hot smoke during inhalation
Areas covered by a denture are usually not involved

Although closely associated with tobacco smoking, it is not premalignant
Develops in individuals with a long history of drinking extremely hot beverages
This suggests that heat, rather than toxic chemicals in tobacco smoke, is the primary cause
“Reverse smoking” produces significantly more pronounced palatal alterations that may be erythroleukoplakic and are considered premalignant
Clinical features:
Older males with a history of heavy long-term cigar, pipe, or cigarette smoking
Palatal mucosa becomes diffusely gray or white
Numerous slightly elevated papules with punctate red centers that represent inflamed and metaplastically altered minor salivary gland ducts are noted

Treatment:
Completely reversible once the habit is discontinued
Severity of inflammation is proportional to the duration and amount of smoking
Usually resolves within 2 weeks of cessation of smoking
Biopsy is rarely indicated except to reassure the patient
Biopsy should be performed if the lesion persists after 1 month of discontinuing the habit

Sanguinaria extract, a mixture of benzophenanthridine alkaloids derived from the common bloodroot plant (Sanguinaria canadensis), has been used in oral rinses and toothpaste products since 1982
Effective against plaque buildup and gingivitis
It has also been shown to be carcinogenic

Clinical features:
Adults in the 4th to 9th decade of life
White, velvety, wrinkled or corrugated patch of leukoplakia in the maxillary vestibule, involving both the attached gingiva and vestibular mucosa
May be seen in the anterior mandibular vestibule

Treatment:
No appropriate treatment has been established
Initial biopsy is mandatory
If diagnosis of dysplasia is rendered, the condition should be treated in a fashion similar to the treatment of other potentially premalignant processes
Less severe changes managed according to clinical judgement depending on the extent & duration of the lesion
Complete discontinuation of Sanguinaria-containing products and cessation of any other harmful habits such as tobacco or alcohol use is mandatory
Careful clinical follow-up with a biopsy of any recurrent or worsening lesions should be performed