It is a multisystemic disease characterized by a predisposition to neoplasms and other developmental abnormalities as will be listed down later. It was 1st described by Robert James Gorlin and Robert William Goltz in 1960.

How is it acquired?

It is acquired through autosomal dominant inheritance, meaning that if you inherit one gene for this syndrome from any one parent, youâ€™ll inherit this syndrome.

Occurs at about 2-3rd decade of age 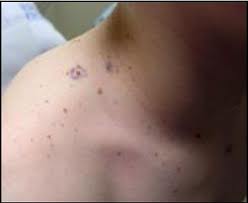 What are the Signs and symptoms?

– can occur on the face, chest, back

– the number varies in different individuals

These are basically punctiform depressions in the skin of palms and soles of feet. The presence of three or more palmar pits constitutes a major diagnostic criterion in Gorlin syndrome.

– Its presence is usually the 1st symptom of NBCC, also occurs in 90% of cases

– usually starts in adolescence, recur until about 30 of age

What genes are related to Gorlin syndrome?

Mutations in the PTCH1 gene cause Gorlin syndrome.The PTCH1 gene is a tumor suppressor gene, which means it keeps cells from proliferating too rapidly or in an uncontrolled way. This gene provides instructions for making a protein called Patched-1. Patched-1 prevents cell growth and division (proliferation).

Mutations in this gene prevent the production of Patched-1 or lead to the production of an abnormal version of the receptor. An altered or missing Patched-1 receptor cannot effectively suppress cell growth and division. As a result, cells proliferate uncontrollably to form the tumors that are characteristic of Gorlin syndrome.

What is the treatment for Gorlin’s syndrome?

i)Â  Enucleation, with or without curettage

Advantage of conservative approach: preservation of anatomical structures (including teeth), hence is the treatment of choice in younger patients. However, it follows that the recurrence rate of KCOT with this treatment is higher than that of aggressive treatment.

Multiple keratocystic odontogenic tumours (KCOTs) as pointed by the arrows

1. Dental: Periodic clinical and radiological follow up (3-4 times a year) to check any early signs of recurrence

2. Dermato: All patients with Gorlin’s syndrome should see a dermatologist for regular skin examinations so that basal cell carcinomas can be treated when they are small. This may require surgery or one of the many other treatments available for these tumours including cryotherapy, photodynamic therapy, and flourouracil cream.They should not receive treatment with irradiation as this is liable to provoke the development of more tumours.

-Sun protection is vital to reduce the number of skin cancers developing but even complete protection will not prevent all basal cell carcinomas in patients with Gorlin’s syndrome.

The whole family should be examined and genetic counseling that considers the genetic risks is advisable for all patients with this syndrome, both familial and sporadic.