Early Childhood Caries (ECC) is a chronic and infectious oral disease of young children, most commonly seen in poor and minority populations.

The American Dental Association (ADA) defines ECC as “the presence of one or more decayed (non-cavitated or cavitated lesions), missing (due to caries) or filled tooth surfaces in any primary tooth in a preschool-age child between birth and 71 months of ageâ€.

What are the causes? 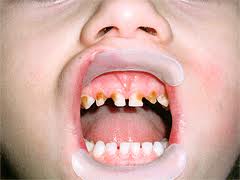 What are the types?

This occurs as a result of a child drinking form a milk bottle until he falls asleep, and the bottle is allowed to be left in the mouth all throughout the night. This can cause caries in all the teeth because milk is made of sugars (lactose). When it is broken down by enzymes in the mouth, they become these sugars which are then harmful to the teeth. Leaving the bottle all throughout the night means that all the teeth surfaces are exposed to sugar for the entire night (and bear in mind that these children most probably do this every single night), resulting in severe decay of all teeth.

What are the differences between the types?

1. Nursing bottle caries is seen in infants and toddlers only, i.e. the primary dentition only, while rampant caries is seen in all ages, including adolescence. In the latter, the permanent teeth are also involved.

3. Nursing bottle caries is caused specifically by prolonged bottle feeding (eg the milk bottle is left in the mouth all throughout the night) over a long period of time. Rampant caries has mulpitle causes such as large amount of sugary intake, poor oral hygiene, lack of dental health education, frequent snacks, etc.

4. They also differ in their treatment, as discussed in the following section.

If nursing bottle caries or rampant caries is detected early, they can be controlled by application of fluoride or tooth mousse, and educating the parents on how to take better care of the teeth.

Nursing bottle caries in the later stages (eg all the involved teeth have become grossly carious), it can be treated by extracting all the carious teeth. This is acceptable as the permanent dentition will eventually erupt and care be directed towards these teeth. Of course, this is usually done under general anaesthesia (GA), children of that age are unlikely to be cooperative should complete extraction be attempted.

If the patient presents with pain, the caries can be stabilized by removing all carious lesions, and dressing the teeth with a temporary restoration (usually zinc oxide eugenol). If there is soft tissue swelling, or signs of systemic involvement (eg fever), hence the child should be prescribed antibiotics first prior to extraction and incision and drainage of the involved tooth.

In rampant caries, if the permanent dentition is involved, the teeth should be saved as much as possible through root canal treatments.

1. Parents are encouraged to bring their child for a dental check up once their teeth start to grow, ie around 6 months of age. This should be followed up with regular visits twice a year. If the child is deemed as a “high risk patient“, then the child should be called back for dental visits every 3 months.

2. Education- parents and caretakers should be educated so to create an awareness among those who care for the young, especially regarding bottle feeding habits and amount and frequency of sugar intakes. If the child uses a feeding bottle, make sure that the bottle is not in the childâ€™s mouth throughout the nite. If the habit is hard to break, dilute the milk with some water gradually until finally use only plain water in the bottle.