Partial dentures are often associated with the elder age group, to replace permanent teeth that have been extracted. However, in some situations children are also required to wear partial dentures.

Reasons for loss of teeth in children:

A child with a missing front tooth

Children are highly susceptible to trauma. It has been estimated that 11-30% of children suffer trauma to their milk teeth, which represents about 20% of all injuries in preschool children. 22% suffer trauma to permanent dentition by age 14 years. The peak incident for trauma is at 2-4 years old, then again at 8-10 years, with the upper front teeth being the most commonly involved. The reason for this higher tendency for trauma in children is due to instability as the child has just started to learn walking. Also, in milk teeth, the crown (the part of the tooth visible in the mouth) to root (the part of the tooth that is within the jaw bone) ratio is relatively higher compared to permanent teeth, hence it is easier to get knocked out or avulsed if subjected to trauma.

Children that are not taught to clean their teeth properly naturally end up with badly broken down teeth. The normal dilemma is whether to extract a badly broken down tooth before it is naturally shed off. Instead of extracting it, theÂ  patient can opt for root canal therapies or crowns if the condition of the tooth and child permits. An example of a condition with severe destruction of teeth by caries is the “nursing bottle caries“, which is a result of the child sucking on a milk bottle overnight over a long period of time. Milk is broken down into sucrosein the mouth, which is a type of sugar. If the child’s teeth is exposed to this sugar over such a long period of time, the child becomes a victim of rampant caries. 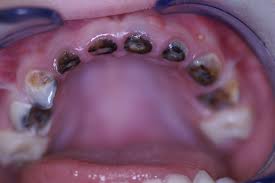 Some people are born with some missing teeth, for example, children with some conditions such as hypohydrotic ectodermal dysplasia and cleft lip and palate.

When is a partial denture needed in a child?

Milk teeth are usually left to fall out by themselves or extracted only when it is very â€œwigglyâ€. If they are extracted prematurely, the succedaneous permanent teeth may drift forward into the empty space and cause lack of eruption space for the other teeth, which then leads to crooked teeth and orthodontic problems. On the other hand, if a milk tooth is highly decayed and is causing the child pain or distress, the infection can spread and worsen the condition. In this case, the tooth or teeth should be extracted. To preserve the space preciously occupied by the milk tooth to avoid orthodontic problems, a partial denture should be given.

What is the difference between partial dentures for adults and children?

Why canâ€™t a partial denture for children be used as a permanent denture?

Children are still growing, and further growth and tooth eruption is anticipated, so the denture will not be able to fit once such changes occur. 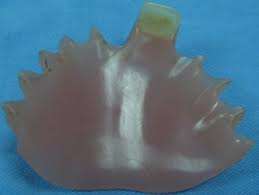 One example is the “spoon denture”. It is especially useful to replace a missing front tooth and serves primarily to restore the childâ€™s appearance.

Rather than a â€œpartial dentureâ€, it serves more like a space maintainer. For example, a crown or a metal band is placed on the tooth (usually a molar) adjacent to the missing tooth, and a metal wire is bent and soldered to the band or crown to prevent any teeth from drifting into the empty space. If an artificial tooth is used to replace the missing tooth, it is called a â€œfunctional space maintainerâ€, while if no artificial tooth is used, it is called â€œnon-functional space maintainerâ€.

2 thoughts on “Understanding The Use of Partial Dentures in Children”