It’s time to replace your partial dentures. But what do you do with your old ones? It seems a shame to just throw them away. After all, they were expensive, and there are so many people who can’t afford dentures but need them. Did you know that there are over 3,600,000 sets of dentures produced around the world every year? And did you know that each set contains around roughly US$25 of precious metals? Unfortunately, because of the personalized nature of dentures, they are usually not recycled in such a way that they are given to another person to wear. There are some things, however, that you can do with your partial dentures other than just tossing them in the nearest trash bin. 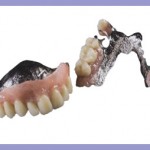 The metal components of dentures can be reused

According to the â€œecological rucksackâ€ theory, every element that is mined has an equivalent material intensity value which is calculated based on the amount of materials required to produce one kilogram of that material. Rare metals such as gold have very high ecological rucksack values. The Wuppertal Institute calculated that for every kilogram of gold produced, around 540,000 kg of essential materials necessary for economic activities are used up, not to mention associated energy costs. Consequently, if all the gold we used was recycled, we could save something like 300 times the materials and energy used in mining new supplies.

Clasps and other metals used to stabilize dentures are often alloys of gold, silver and palladium. According to Miyoshi, 5 grams of these alloys are worth around 2,000 yen once they are separated from the dentures. Before that, the clasps are nothing but clasps. 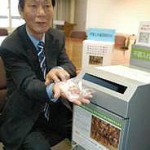 “People on average get new dentures every three years, because the condition of their teeth changes,” Miyoshi said. “Once the new ones are made, dentists usually give the old ones back to the patients. But most people don’t know what to do with them and they end up keeping them in their drawers. That’s really a waste of something useful.”

Some local governments classify dentures as burnable wastes, so some people end up throwing them away.

“In our lab, we make about 30 new dentures a day. That means 30 more are thrown away,” Miyoshi said.

It was a chat on this very topic with a Meikai University dentist last summer that prompted him to come up with the idea of recycling. He decided he would ask people to donate their disused dentures with metal on them, then take them to a refinery and donate the earnings from selling the pure metals to UNICEF. For some time, Miyoshi had wanted to do something to support needy children in other countries.

“After I had this idea in August, I got so excited and kept thinking about recycling dentures all day and night. I even dreamed about it,” Miyoshi said as he continued opening more packages of dentures — usually along with letters of thanks and support for providing a good way to use them. 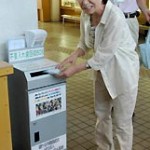 With support from dentists, and the technicians at his lab, the NPO (nonprofit organization) started operating in December, and Miyoshi believes it is the first one in Japan doing denture recycling. A press release the NPO sent off soon caught media attention, and the unique project has had extensive coverage in newspapers and on television in the Kanto region.

By now almost 1,000 people, mostly elderly, have sent their old dentures after disinfecting them in hot water, wrapping them in a piece of cloth and putting them in a plastic bag as the NPO requests. The items received also include bridges, which are fake teeth placed between natural ones and fixed to them, and crowns, which are fixed onto the remains of a tooth. Some of these are made of pure gold.

2. Donate your partial dentures to a local school’s health class or a dentistry school. Be sure to call first and ask if they would like them.

4. Use your dentures as a gag gift for a 40th or other birthday bash. You could also hide them in a cake or drop them into the punch bowl.

5. Make a zany craft project. Save your dentures for a rainy day when you’re desperate for a way to entertain the grandchildren. Then, whip out the paint, glitter and glue, and decorate them!