TO VIEW BODY OF MANDIBLE 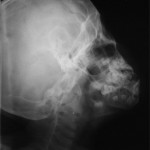 -views premolar, molar and inferior border of the mandible; broader than PAâ€™s
-example: Body Of Left Mandible [right to left]
x-ray tube [aimed under right side of mandible] ïƒž head tilted to left
ïƒž cassette held against side of face by patient parallel to border of mandible and extending 2 cm below it [centered on 1st molar]; 65 kVp, 10 mA

TO VIEW RAMUS OF MANDIBLE 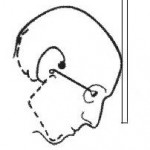 Positioning of the patient to take a Reverse Towne's radiograph

-Posterior-Anterior view, mouth open
-View can be used to observe fractures involving the condylar neck, and also when displacement of the condyle is suspected
-good visualization of the posterolateral wall of the maxillary antrum.
-cassette held by a holding device vertically.
-example: head is centered in front of film with the canthomeatal line projected 25ï‚° -30ï‚° downward; beam goes through the occipital bone; 75-80 kVp.
5. Posterior-Anterior: View used to observe the mandibular angle and body.

V. OTHER VIEWS CONSIDERED BY DENTAL

– film-5×7 screen film [usually held vertically] hand held by patient
– provides an excellent “scout” view of gross changes on the condylar surfaces
– example for taking a radiograph on the left TMJ, patientâ€™s midsagittal plane should be perpendicular to deck.
ïƒž rotate head 7ï‚° -10ï‚° away from the cassette [moves opposite condyle out of the way]
ïƒž cassette held against ear and cheekbone on left side of face by patient. The mouth can be opened or closed.
ïƒž x-ray tube directed -5ï‚° , beneath the zygomatic arch on right.

– cassette held by a holding device vertically [cephalostat]
– frontal radiograph
– medial and lateral aspect of condyle, the neck, the eminence and sometimes the zygomatic arch.
– example for left TMJ
patient is seated with midsagittal plane perpendicular to deck and Frankfort plane parallel to the deck.
ïƒž cassette is placed behind the left TMJ ïƒž turn head 20ï‚° to the left
ïƒž x-ray tube directed +35ï‚° , from the front through the floor of the left orbit and left TMJ

– film-5×7 screen film [usually held vertically] and is hand held by patient
– provides a view down the long axis of the condyle and the relationship of the condyle to the fossa
– example for left TMJ – patientâ€™s midsagittal plane perpendicular to deck
ïƒž cassette held against ear and cheekbone on left side of face by patient
ïƒž x-ray tube [directed +25,1/2″ behind and 2″ above the right external auditory meatus 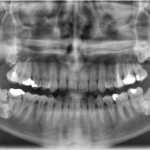 – Correctly called a pantomograph or a panoramic radiograph; Panorex the brand name of the first panoramic machine introduced to North America by the S.S. White Co. in 1959.
– The area where the images are sharp is a 3D horseshoe shaped zone called the focal trough, image layer, zone of sharpness, central image layer; therefore, correct patient positioning is critical.
– Frankfort plane parallel to the deck, the midsagittal plane, perpendicular to the deck, and the teeth in the focal trough.
– Real image – object lies between the center of rotation and the film.
– Ghost image – object lies between the x-ray source and the center of rotation.

In an operational environment, the comprehensive dentist should be familiar with the four basic medical views: Waters, Posterior-Anterior, Lateral, and the Submentovertex for evaluating facial trauma.