Extraoral radiographic examinations include all views of the orofacial region with films positioned extraorally.

Importance to the Comprehensive Dentist:

Cephalometric radiography – head measurement x-ray; taken using a cephalostat [head-holding device] in a precise manner so it can be repeated at a later date for comparison.
The first word of the description of the x-ray is where the tube is; the second word is where the film is, i.e. a PA film has the tube at the back of the head [posterior] and the film is placed by the face [anterior].
Tube side is always superimposed.
Exposure factors – kVp, exposure time, mA and source-to-film distance
kVp – the potential difference between the cathode and anode of an x-ray tube; the energy of the beam x-rays lower than 65 kVp are seldom used in dentistry.
mA – 1/1000 of an ampere; refers to the current flow from the cathode to the anode, which, in turn, regulates the intensity of radiation emitted by the x-ray tube and, hence, directly influences the radiographic density
exposure time – length of time the x-rays are actually produced
“Rule of 15” – for every 15% increase in kVp, the density on the x-ray will double. If the kVp is increased by 15 then the time must be reduced by Â½ to maintain the same density

-variation of the posterior anterior projection.
-Best view for evaluating facial fractures of zygomatic arches, orbital rims and floors, nasal spine and septum, coronoid processes.
-Can also be used for evaluating the frontal, maxillary, and sphenoid sinuses.
-Trace the lines of Dolan and the elephants of Rogers.
-cassette held by a holding device vertically.
-example: sagittal plane is perpendicular to the plane of the film; chin is raised 37ï‚° so that canthomeatal line is 37ï‚° to the deck; beam is directed at the level of the maxillary sinus; with the radiation of 75-80 kVp

-examines skull for disease, trauma, developmental abnormalities or provides a good record to detect progressive changes in mediolateral dimensions of skull.
-can be used to evaluate orbital rim, frontal and ethmoid sinuses, nasal septum, nasal fossa and orbits; invaluable in detecting a fracture-dislocation.
-cassette held by a holding device vertically.

-view used to evaluate fractures and displacement of a fractured zygomatic arch.
-contraindicated with patients who have a suspected spinal injury.
-reveals the position and orientation of the condyles, the sphenoid sinus, the curvature of the mandible, the lateral wall of the maxillary sinuses.
-good visualization of the base of the skull with foramina and the medial and lateral pterygoid plates.
– cassette held by a holding device vertically.
-example: hyperextend neck backwards as far as possible until the vertex of the head is centered on the film; the canthomeatal line is projected 10ï‚° past vertical so the Frankfurt plane is parallel to the film; beam is directed from below the mandible upward to the vertex; with the radiation of 75-80 kVp.
-NOTE: WHEN WISH TO VIEW THE ZYGOMATIC ARCH, THE EXPOSURE TIME SHOULD BE REDUCED TO 1/3 THAT IS USED TO VIEW THE SKULL. 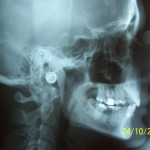 -Used to survey the skull and facial bones for evidence of disease, trauma, developmental abnormalities, in orthodontics, it is used for assessing head growth.
-Proper patient positioning is essential: when truly lateral, the lack of superimposition of the normally superimposed structures suggests a fracture with displacement of fractured segments.
-Anterior/posterior walls of the frontal and maxillary sinuses, nasopharyngeal soft tissues, paranasal sinuses and hard palate; are also delineated in this view.
-cassette held by a holding device vertically.
-example: head is positioned with left side of face near the cassette and the midsagittal plane parallel to the plane of the film; source of beam [the tube] is 60″ from the midsagittal plane of the patient; to reveal the soft tissue outline.
-use either a wedge filter to reduce the radiation intensity in the anterior region or a cassette with intensifying screens which provide reduced fluorescence in the area; with the radiation of 75-80 kVp.