Temporomandibular joint also known as jaw joint or mandibular joint is an ellipsoid variety of synovial joints, right and left joints forming a bicondylar articulation (Williams et al, 1999). The common features of synovial joints exhibited by this joint include a fibrous capsule, synovial membrane et fluid and tough adjacent ligaments etc. However the features which differentiate and make it unique in itself are:

(i) Articular surfaces being covered by fibrocartilage instead of hyaline cartilage,

(ii) movements are not only guided by shape of bones, muscles and ligaments but also by occlusion of teeth,

(iii) since both joints are joined by a single bone i.e. mandible, these can move independently of each other (Moore). Elaborating the last point, Dubrul (1996) emphasizes that it is not only the mandible which is a single bone but the other one i.e. cranium also is mechanically a single stable component. So he necessitates the usage of correct terminology for the joint as craniomandibular articulation. He further adds that the label temporomandibular joint constantly reinforces the tendency to think of only one side when speeking about the joint function. This habit is unwittingly implanted in beginning anatomy courses when joint dissections are carried out by different students on opposite sides of a sagittally sectioned head.

It consists of an ovoid condylar process seated atop a narrow mandibular neck. It is 15-20 mm side to side and 8-10 mm from front to back with its long axis being at right angle to plane of ramus. It thus doesn’t lie in frontal plane of skull since 2 sides of mandible spread widely posteriorly. Thus if long axes of 2 condyles are extending medially, then they meet approximately at basion on the anterior limit of foramen magnum. This forms an angle open towards the front, varying from 145 – 160 degrees. The lateral pole of condyle is rough, bluntly pointed and projects only moderately from plane of ramus while medial pole extends strongly inwards from plane of ramus. The articular surface lies on its antero superior aspect thus facing the posterior slope of articular eminence of temporal bone. It further continues medially down and around the medial pole of condyle and faces entoglenoid process of temporal bone when the jaw is held in occluded position (Dubrul, 1996). 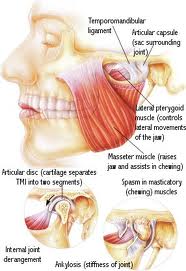 The adult condyle varies considerably in form from that found in the young child. In the former, the neck is thin and elongated and is readily fractured. Although an apparent weakness, this feature gives some protection to the delicate roof of glenoid fossa. In the infant the condyle is short and stubby having a copious blood supply (Blackwood, 1965), but avascular necrosis may occur following trauma, because the neck resists fracture and the crushing force is transmitted to its superior surface.

The articular surface of the temporal bone or facies articularis is more complicated than that of mandible. It is situated on the inferior aspect of temporal squama anterior to tympanic plate.

(a) Articular eminence : is the entire transverse bony bar that forms anterior root of zygoma. This articular surface is most heavily travelled by condyle and dise as they ride forwards and backwards in normal jaw function. 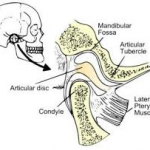 (e) Lateral border of mandibular fossa is usually raised to form a slight crest joining articular tubercle in front with postglenoid process behind.

(f) Medially the fossa narrows considerably and bounded by a bony wall the entoglenoid process which passes slightly medially as medial glenoid plane.

The roof of the mandibular fossa separating it from middle cranial fossa is always thin and even in heavy skull, translucent. This is a clear evidence that the articular fossa although containing the posterior rim of disc and the condyle is not a functionally stress bearing part of the craniomandibular articulation. This function is normally always between the condyle and disc on one hand and the disc and articular eminence with its extended planes (vide supra) on the other (Dubrul, 1996).