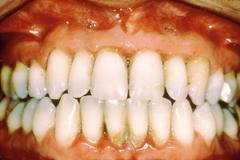 If gingivitis is not treated, the condition will worsen and gradually lead to periodontitis, which is infection and inflammation of the supporting tissues of the teeth, which includes the gums, the fibres attaching the tooth to its socket (the periodontal ligament), the cementum (the outermost layer of the root of the tooth), and the bone which holds the tooth in its place. You should suspect periodontitis if you have other symptoms such as:

Canker sores, or mouth ulcers can appear anywhere in the mouth and are usually painful. When they appear on the gums, that area becomes sore and is associated with gum bleeding. Canker sores often heal with time.

Patients undergoing chemotherapy may experience side effects such as stomatitis and dry mouth, which leads to occurrences of mouth ulcers and infection on the gums and in the mouth.

People who smoke have a higher tendency to develop gum diseasessuch as ginigivitis and periodontitis. 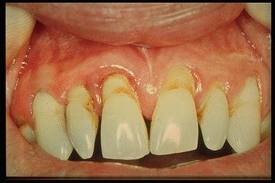 Trauma to teeth and gums due to wrong tooth brushing technique

As important as it is to brush and floss your teeth daily, an emphasis should equally be placed on the correct technique in carrying out these tasks, as the wrong technique may be more detrimental to the health of your teeth and gums as compared to not doing it at all. For instance, if you brush your teeth with too vigorously and with the wrong stroke of motion (eg horizontal strokes instead of the recommended bass technique), you may be gradually wearing away tooth substance and induce trauma to the gums, which leads to gum bleeding and gum recession, which is aesthetically unpleasant. 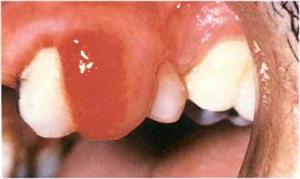 There is increased level of sex hormones during pregnancy, namely oestrogen and progesterone. Progesterone is the one responsible for increased vascularity and permeability of gingival blood vessels. As a result, the gums may appear bright red, swollen and sensitive, and may even be spontaneous bleeding, increase in exudates and mobility. This is also known as â€œpregnancy gingivitisâ€. It may even result in pregnancy epulis, also known as pyogenic granuloma of pregnancy, which essentially is a soft swelling, deep red in color, and bleeds easily, which causes patient concern. This epulis may appear anytime during pregnancy but usually occurs after the 3rd month. It usually regresses partially or completely after parturition. These conditions are not imminent of pregnancy; rather, they are the aggravated response to plaque and other plaque-inducing factors because of the hormonal changes in the body. Thus, maintaining good dental hygiene throughout pregnancy can help reduce inflammation of the gums.

Sometimes you may have gum bleeding for days following an appointment with a dentist during which scaling was done. This could have been because you had poor gum health previously, and removal of plaque and calculus left a relatively â€œopenâ€ gingival sulcus (the pocket between teeth and your gums accessible by a blunt dental probe) from which bleeding can occur. Another reason why youâ€™re bleeding could also be that the dentist could have accidentally caused too much trauma to your gums while scaling.

Sometimes bleeding gums is a sign of other systemic problems such as leukemia and bleeding and platelet disorders.