Surface properties is the main reason for the use of titanium in medical technology. However, mechanical properties like elasticity and density/strength values are an additional clear advantage of titanium over other metals, because the supported or replaced natural structures of the human body are normally even more elastic and lightweight than titanium.

A fractured implant due to low elasticity

Independent of the specific composition of the selected titanium, the Young’s modulus describing the material’s elasticity lies between 100000 and 110000 MPa which is only a little more than 50% of the corresponding values of 210 000—220000 MPa for stainless steel, other Fe alloys or CoCr alloys. The elasticity of titanium represents one of the most interesting properties of this material, as it allows the designer to almost half the stiffness of the device using the same geometry when compared to other implant metals. A higher elasticity or lower stiffness offers the advantage of adapting the implant or prosthesis behaviour to bone and to reduce the change in its deformation behaviour after implantation of a metal device compared to the pre-existing situation. The so-called “stress shielding” effect is a matter of continuing discussion but it certainly appears to be important in bone remodelling over long term periods such as occurs in permanent joint replacements. The designer has to be aware that the lower elasticity and hence lower stiffness of a device made of titanium also reduces the capability of the bone implant construct to support the bone and therefore yields to larger deformations under static or dynamic loads. Therefore, the titanium’s elasticity may be an advantage with respect to bone remodelling, however, it could also compromise the function of the skeletal system by leading to excessive and inadmissible deformations and/or motions.

A crack starting in a dental implant due to fatigue

The main difference between titanium and titanium alloys with respect to design is given by the strength, which is clearly lower for the pure metal. As the classification in the standard 1SO 5832-2 for pure titanium shows, the strength is linked to the elongation at rupture; higher strengths are reached with material compositions which allow for a smaller elongation. Tensile strength values of pure titanium additionally depend on the thermomechanical treatment of the material and lie between 240—680 MPa after annealing or cold deforming respectively. Specific heat treatments allow tensile strengths of up to 950 MPa to be reached. Alloyed titanium has distinctly higher tensile strengths between 900 and 1100 MPa and may reach values above 1 200 MPa. The ratio of the fatigue strength between pure and alloyed titanium is about the same compared to the ratio of the tensile strength that also shows higher values for the alloy. The consequence of this fact is that the designer of implants chooses alloyed titanium in cases in which he is encountering possible problems with respect to the strength of the design under static or dynamic loads. The choice of the alloy might be considered to be a compromise at the expense of biological safety of the material, as the alloying elements can show detrimental (aluminium) or even toxic (vanadium) effects. However, titanium alloys described in the standard series ISO 5832 have not proved to be associated with significant risks in chemical applications. 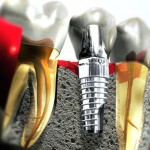 Dental implants are to simulate real teeth, therefore must mimic their mechanical properties as well as possible

Some of the devices in medical technology have to undergo a shape adaptation at the time of use. For example, plates used in osteosynthesis require intraoperatively a plastic deformation in order to be fit to the curvature of the bone, fixed by screws. As this procedure has to be done under sterile conditions and without the help of temperature treatments the ductility of the implant material may become quite an important aspect with respect to function. The designer has to choose the type of material according to the requirements for plastic deformation, consequently having to accept a lower strength value, even though this may become critical for the long-term mechanical safety of the implant. A redesigning process may then be the consequence and would include revaluation of the choice of material and/or geometrical aspects.

Another property the designer has to take into account in selecting the material for a specific device under development is the magnetic susceptibility. Magnetic resonance imaging (MRI) becomes more and more the tool of choice for diagnosis and clinical follow up especially in spinal surgery where the position of an implant has to be controlled not only in relation to the bony structure but also to the soft tissue. ln such imaging, higher values of the magnetic susceptibility lead to artefacts in the region surrounding the metal implant. The size of the influenced and “covered” area increases with increasing susceptibility. With respect to MRI artefacts, titanium and its alloys with susceptibility values of 2.2-2.3 x10-4 show an advantageous behaviour compared to Fe alloys with susceptibilities of 3.0 x10-3. In critical cases of spinal surgery where MRI diagnosis is needed, titanium is the metal implant material of choice with clear advantages over Fe or CoCr alloys, even though the strength values are inferior to these.

The Young’s modulus, the strength and the .ratio density/strength of titanium and titanium alloys are without any doubt different and specific compared to other metallic implant materials. Besides the surface properties of titanium, these differences can also have positive influences and effects on applications in medical technology. However, they have to be recognized and considered, other-wise the designer runs the risk of fatal consequences for the implant and/or the patient.