Denture adhesives augment the same retentive mechanisms already operating when a denture is worn.Â  They enhance retention through optimizing interfacial forces by:Â  1) increasing the adhesive and cohesive properties and viscosity of the medium lying between the denture and its basal seat; and 2) eliminating voids between the denture base and its basal seat.Â  Adhesives (or, more accurately, the hydrated material that is formed when an adhesive comes into contact with saliva or water) are agents that stick readily to both the tissue surface of the denture and to the mucosal surface of the basal seat.Â  Furthermore, since hydrated adhesives are more cohesive than saliva, physical forces intrinsic to the interposed adhesive medium resist the pull more successfully than would similar forces within saliva.Â  The material increases the viscosity of the saliva with which it mixes, and the hydrated material swells in the presence of saliva/water and flows under pressure.Â  Voids between the denture base and bearing tissues are therefore obliterated.

Synthetic materials presently dominate the denture adhesive market.Â  The most popular and successful products consist of mixtures of the salts of short-acting (carboxymethylcellulose or “CMC”) and long-acting (poly[vinyl methyl ether maleate], or “gantrez”) polymers.Â  In the presence of water, CMC hydrates and displays quick-onset ionic adherence to both dentures and mucous epithelium.Â  The original fluid increases its viscosity and CMC increases in volume, thereby eliminating voids between prosthesis and basal seat.Â  These two actions markedly enhance the interfacial forces acting on the denture.Â  Polyvinylpyrrolidone (“povidone”) is another, less-commonly used agent that behaves like CMC.Â  Over a more protracted time course than necessary for the onset of hydration of CMC, gantrez salts hydrate and increase adherence and viscosity.Â  The “long-acting” (i.e, less soluble) gantrez salts also display molecular cross-linking, resulting in a measurable increase in cohesive behavior.Â  This effect is significantly more pronounced and longer lived in calcium-zinc gantrez formulations than in calcium-sodium gantrez.Â  Eventually all the polymers become fully solubilized and washed out by saliva; this elimination is hastened by the presence of hot liquid.

Gantrez, consisting of a methylvinylether/maleic anhydride copolymer, fixes denture plates to the roof and base of the mouth. Gantrez is often difficult to identify because denture products are not required to list ingredients, notes a 1996 report by Business Week. Benzene, a chemical additive in glues, paints, furniture waxes and detergents, helps bind the Gantrez ingredients. These denture adhesives do not completely dissolve in saliva, but require multiple applications throughout the day to enhance denture adhesion. The U.S. Food and Drug Adminstration has regulated permissible benzene levels in fixative adhesives since 1996; however, individuals using multiple applications may still be at risk for unwanted benzene exposure. Dental relining or plate adjustment may decrease the need for denture adhesives.

Using Gantrez fixative throughout the day can result in benzene exposure. Benzene is a carcinogen that causes tremor, stomach irritation and rapid or irregular heartbeat, warns the Centers for Disease Control and Prevention. Securing dentures with the copolymer Gantrez may cause excess benzene exposure. Procter & Gamble recommends the use of denture adhesives containing calcium, zinc, and gantrez to reduce bacterial accumulation in the mouth. The benefits of Gantrez, however, may not be worth the risk. 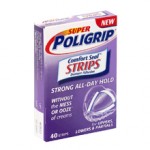 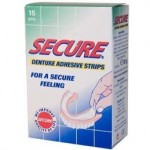 Bioforce Secure denture adhesive includes in its list of ingredients polyvinyl acetate, a non water-soluble ingredient, and sodium carboxymethylcellulose. The product description states that this chemical is also found in some chewing gums. Fixative copolymers such as chewing-gum ingredients, however, do not remain attached to the gums for several hours per day. Bioforce Secure does not describe the amount of denture cream required to avoid excessive exposure to benzene. This denture cream similar to Fixodent and Poligrip does not list Gantrez or its exposure risks on its product labels.