Root canal treatment (RCT) is a procedure whereby the pulp of the tooth is extirpated, and filled with suitable filling materials to replace the pulp. It is also known as endodontic therapy, and the sole purpose for endodontic therapy is to remove all the inflamed and necrotic tissues in the pulp, as well as the bacterial component, making the pulp and the root canals of the tooth as clean as possible.

What are the reasons to perform a root canal?

When a tooth is attacked by dental caries, it always starts on the surface of the tooth, slowly progressing following the shape of the enamel prism. Because enamel prisms are arranged at right angles to the surface at all times, decay of the deeper layers of the enamel prism will lead to undermining of the tooth structure. When this occurs, application of normal occlusal load onto the decayed tooth will cause the tooth to break down. This is a common scenario in rural areas where the population are poor, crowded, lowly educated, or does not have accessibility to dental care. After a period of time, the tooth may become so badly broken down that it is not possible to restore it with restoration materials anymore, because of the lack of tooth structure to retain the restoration material in place. The only treatment options left are extraction and root canal therapy as the root canals would have been exposed to the oral cavity environment, and be contaminated by saliva. The saliva contains the most bacteria compared to any part of our body, and infection of the root canals can lead to pus formation. To individuals who can afford it, root canal therapy is the better choice as it retains the tooth in the jaw, preventing alveolar bone resorption.

Perirdicular disease with intra-oral radiograph showing radiolucency around the roots

Periradicular or pulpal diseases can occur due to fractured tooth, dental caries, trauma, and also overheating of the tooth during a restoration procedure. When this occur, the patient will experience symptoms such as pain on biting, and feeling like the tooth is elevated on its socket. Root canal therapy has to be done after confirmation of the diagnosis by a series of tests and intro-oral radiograph. This is to remove the diseased pulp or to drain the pus through the root canal so that further infection and destruction of the toothâ€™s supporting tissues will not occur.

When a tooth is already non vital, a root canal therapy is necessary to remove the remnants of the pulp. This is to prevent the remnants from decaying and becoming a source of nutrient for the bacteria in the root canal. If the remnants are left in the pulp for a long time, it will lead to pus formation and also granulation tissue formation, will is associated with symptoms such as pain, bad breath, bleeding and swollen gums. 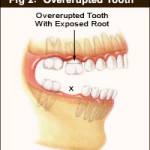 Over-erupted tooth encroaching the space in the opposing arch

When there is tooth loss in the opposing arch, it is possible for the tooth to over-erupt, encroaching on the empty space. Similarly, if there is loss of a tooth, the adjacent tooth can tilt towards the empty space so severely that it is not possible for the dentist to replace the missing tooth with a prostheses. When this happens, intentional root canal treatment can be done on the tilted or over-erupted tooth, so that tooth structure can be cut off without causing pain and sensitivity to the patient. After that, the empty space will be replaced with any prostheses deemed suitable. However, as this procedure is very destructive, invasive and deemed unethical, it is often not carried out. Another option would be to realign the tooth by orthodontic means, however, this method will take more time and is more costly than intentional RCT.