A root canal treatment (RCT) is a procedure whereby the pulp of the tooth is extirpated, and filled with suitable filling materials to replace the pulp. It is also known as endodontic therapy, and the sole purpose for endodontic therapy is to remove all the inflamed and necrotic tissues in the pulp, as well as the bacterial component, making the pulp and the root canals of the tooth as clean as possible.

How does the dentist make the pulp and the root canals of the tooth clean? 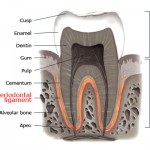 The pulp is the innermost layer of the tooth

This procedure is also known as cleaning and shaping. It is done after the dentist has drilled a hole in the tooth, and expose the innermost layer of the tooth â€“ the pulp. There are two components in cleaning and shaping â€“ the mechanical part and the chemical part.

The mechanical part is when a file is introduced into the root canals with gradual increase of the file sizes. These files have cutting edges and they will cut away some part of the dentine surrounding around Â the root canal. This slowly enlarges the root canal so that irrigation material can be introduced into the canals to flush out the necrotic materials and the bacteria, and also to allow the restorative material to be placed into the canals. Cleaning and shaping has to be done till the apex, which is at the end of the canals. Whether the file have reached the apex or not can be determined using an apex locator or by taking a radiograph. 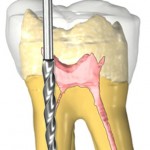 The chemical part is by using a suitable irrigant to flush the canals, as stated earlier. The ideal properties of an irrigant are

What are the indications for root canal therapy?

What are the advantages of root canal treatment?

Root canal therapy is able to retain the natural tooth instead for opting for extraction. By retaining the natural tooth, bone resorption occurs slower and also the patient will have better proprioceptive senses. Root canal therapy have very high success rate. With successful treatment, the tooth can be retained for a lifetime provided that bone level is satisfactory, and will not show any symptoms. However, there are various form of root canal morphology, especially in the second and third molars. Sometimes a canal will be missed or there will be inadequate cleaning and shaping. In these cases, reinfection can occur, and an endodontic re-treatment will be needed. 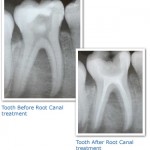 A suitable restorative material is placed into the root canals after cleaning and shaping is completed.

Although root canal therapy is a very good treatment option, not all teeth are suitable for this treatment as some factors may lead to a poor prognosis of the tooth, such as severe loosening of the tooth, or root fractures, or patients with systemic disease that will complicate the endodontic procedure. For the posterior teeth that has underwent root canal therapy, a crown is almost always needed to protect the tooth. This is because after removal of the dentine surrounding the canals during cleaning and shaping procedure, the tooth will be weakened and become more brittle, rendering it to increased likelihood of fracture. For anterior teeth, if there has been too much loss of tooth structure, a crown will also be indicated. In certain severe cases, post and core might even be needed. Hence, the cost of the whole procedure could be costly. Therefore, it is wise to listen to the advice and opinion of the dentist who is looking at the teeth clinically, or if in doubt, get a second opinion from another dentist.