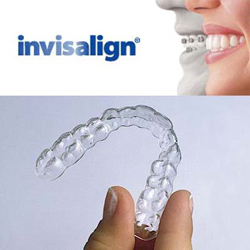 There are many orthodontic appliances available to correct crooked or crowded teeth â€“ from traditional metal braces to clear aligners. Invisalign is a type of clear aligner therapy which is becoming popular due to its transparent orthodontic trays.

Invisalign is a teeth straightening alternative to traditional dental braces which uses a series of clear plastic removable orthodontic trays called aligners. The trays are custom made according to your dental needs and can be provided by trained orthodontists and dentists.

How does Invisalign work?

What can Invisalign be used for?

Invisalign can be used if you have:

What are the advantages of Invisalign?

What are the disadvantages of Invisalign?

How much would Invisalign cost?

An accurate estimate would be difficult to provide since treatment costs vary depending on each individual and the problems they face. The national average cost for Invisalign braces is about $5,000 with a starting price of $3,500 but due to variation in regional overhead, there can be significant differences in fee charges.

1 thought on “How does Invisalign Work?”