The glandular odontogenic cyst is a rare, developmental odontogenic cyst. Most common site of occurrence is the front region of the lower jaw where they present as slow-growing, painless swellings. The cyst has a potentially aggressive, locally invasive nature and a tendency to recur.

Radicular cysts are subdivided into apical, lateral and residual types depending on its position to the root of the tooth.

Apical radicular cysts are the most common cysts in the jaws and are associated with non-vital tooth. They account for 75% of the radicular cysts, are frequently symptomless when small and usually discovered in routine x-rays. Enlargement of the cyst leads to expansion in the bone and thinning of the outer layer of the jaw bone or ‘egg shell crackling’, which ultimately may discharge through a sinus (an abnormal passage leading from a pus-filled cavity to the tissue surface). However, majority of radicular cysts do not grow to large dimensions.

The cysts can arise at any age after tooth eruption but are most common between 20 and 60 years of age and can occur in relation to any tooth in the mouth. 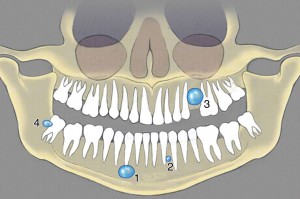 The other varieties of radicular cysts are less common. The residual cyst is the radicular cyst which has remained in the jaw and failed to resolve after the causative root or tooth is extracted. The lateral type is very uncommon and arises as a result of extension of inflammation from the pulp into the supporting tissues on the sides of the tooth along a lateral root canal.

This type of cyst arises alongside a partly erupted wisdom tooth involved by pericoronitis. Almost all occur in the lower jaw and most are located at the cheek side of the tooth.

The cyst presents most commonly in the 5th and 6th decades and occurs more frequently in males. It may be symptomless or present as a slowly enlarging swelling in the front region of the midline of the palate. Occasionally it discharges into the mouth in which the person may complain of a salty taste. Pain may occur if the cyst becomes secondarily inflamed.

The nasolabial cyst is a rare lesion which arises in the soft tissue of the upper lip just below the ala of the nose. It has been suggested that it arises from remnants of the embryonic nasolacrimal duct.

It presents as a slowly enlarging soft tissue swelling obliterating the nasolabial fold and distorting the nostril. The cyst may arise on both sides of the face and the majority present in the 4th decade and in women.

Median cysts are rare and occur in the palate or the lower jaw. 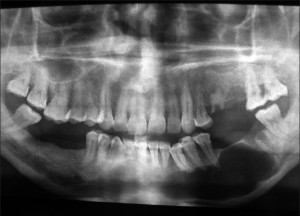 A variety of terms have been used to call the lesion, including simple bone cyst, traumatic bone cyst, hemorrhagic bone cyst and unicameral bone cyst. It has been suggested that trauma to the bone produces intramedullary hemorrhage which fails to organize and heal and that cavitation occurs by subsequent hemolysis and resorption of the clot.

The solitary bone cyst occurs predominantly in children and adolescents with a peak in the 2nd decade. The cyst arises most frequently in the premolar and molar regions of the lower jaw. The majority of solitary bone cysts are symptomless with some degree of bony expansion in some cases.

The aneurysmal bone cyst is rare in the jaws. It may occur alone or be associated with other disorders of bone. Most reported cases have arisen in the lower jaw and have occurred in children or young adults.

Aneurysmal bone cysts present as firm swellings causing facial deformity and may be associated with pain. The cyst expands slowly, and sudden expansion following minor trauma is indicative of pain and bleeding inside the cyst Teeth remains usually vital but malocclusion and root resorption can occur.

This is an uncommon developmental anomaly of the lower jaw which may be mistaken as a cyst on x-ray. The cavity occurs due to a developmental defect on the lingual aspect of mandible which contains a portion of sublingual or submandibular salivary gland. It is a symptomless chance finding during routine radiographic examination which occurs between the premolars and the angle of the jaw. No treatment is required.