DEFINITION
The source of epithelium probably is the epithelial cell rests in the periodontium of the buccal bifurcation of mandibular molars..

Clinical Features
A common sign is the lack of or a delay in eruption of a mandibular first or second molar.
Lingual cusp tips may be abnormally protruding through the mucosa, higher than the position of the buccal cusps.
The first molar
The teeth are always vital.
The age of detection is younger, within the first two decades for a BBC

RADIOGRAPHIC FEATURES
Location.
The mandibular first molar
It is always located in the buccal furcation of the affected molar . 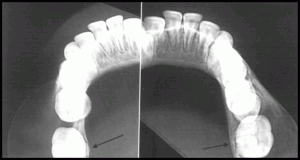 Periphery and shape
circular shape with a well-defined cortical border
Superimposed over the image of the roots of the molar.
Internal structure
The internal structure is radiolucent.
Effects on surrounding structures.
Tipping of the involved molar so that the root tips are pushed into the lingual cortical plate of the mandible , and the occlusal surface is tipped toward the buccal aspect of the mandible
If the cyst is large enough, it may displace and resorb the adjacent teeth and cause a considerable amount of smooth expansion of the buccal cortical plate.

DIFFERENTIAL DIAGNOSIS
periodontal abscess
The fact that only a BBC tilts the molar as described helps to differentiate it from other lesions.

ODONTOGENIC KERATOCYST
Definition
An odontogenic keratocyst (OKC) is a non inflammatory odontogenic cyst that arises from the dental lamina.
CLINICAL FEATURES
The second and third decades, male predominance.
OKCs usually have no symptoms, although mild swelling may occur.

RADIOGRAPHIC FEATURES
Location
posterior body of the mandible
Posterior to the canines) and ramus
The epicenter is located superior to the inferior alveolar nerve canal.. 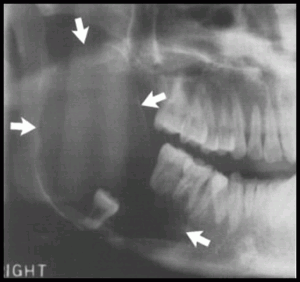 OKC occupying most of the right mandibular ramus

Periphery and shape
Evidence of a cortical border with scalloped outline
Internal structure
radiolucent
In some cases curved internal septa may be present, giving the lesion a multilocular appearance
Effects on surrounding structures
An important characteristic of the OKC is its propensity to grow along the internal aspect of the jaws, causing minimal expansion
OKCs can displace and resorb teeth but to a slightly lesser degree than dentigerous cysts.
The inferior alveolar nerve canal may be displaced. inferiorly.

DIFFERENTIAL DIAGNOSIS
Dentigerous cyst
The cyst is likely to be an OKC if the cyst is connected to the tooth at a point apical to the cementoenameljunction or if no expansion of the cortical plates has occurred.
Ameloblastoma
Odontogenic myxoma,
A simple bone cyst

LATERAL PERIODONTAL CYST
Definition
Lateral periodontal cysts are thought to arise from epithelial rests in periodontium lateral to the tooth root. This condition usually is unicystic, but it may appear as a cluster of small cysts, a condition referred to as botryoid
odontogenic cysts.
IntraÂ­bony counterpart of the gingival cyst in the adult.
RADIOGRAPHIC FEATURES
Location
mandible, lateral incisor to the second premolar
Periphery and shape. well-defined radiolucency with a prominent cortical boundary and a round or oval shape
Internal structure .The internal aspect usually is radiolucent. The botryoid variety has a multilocular appearance. 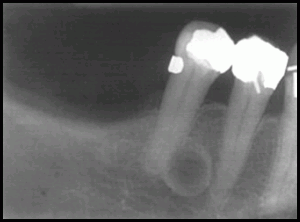 DIFFERENTIAL DIAGNOSIS
A small OKC, small mental foramen, or small neurofibroma or a radicular cyst at the foramen of a lateral (accessory) pulp canal.

RADIOGRAPHIC FEATURES
Location
Equal distribution between the jaws.
Most (75 %) occur anterior to the first molar, pericoronal radiolucency.
Periphery and shape. The periphery can vary from well defined and corticated with a curved, cyst like shape to ill defined and irregular.
Internal structure. The internal aspect can vary in appearance. It may be completely radiolucent; it may show evidence of small foci of calcified material that appear as white flecks; or it may show even larger, solid, amorphous masses .
In rare cases the lesion may appear multilocular.
Effects on surrounding structures.
Occasionally (20% to 50% of cases) the cyst is associated with a tooth (most commonly a cuspid) and impedes its eruption.
Displacement of teeth and resorption of roots may occur.