DEFINITION
The Nasopalatine canal usually contains remnants of the nasopalatine duct, a primitive organ of smell, as well as the nasopalatine vessels and nerves.
RADIOGRAPHIC FEATURES
Location
found in the nasopalatine foramen or canal. However, if this cyst extends posteriorly to involve the hard palate ,it often is referred to as a median palatal cyst.
If it expands anteriorly between the central incisors, destroying or expanding the labial plate of bone and causing the teeth to diverge, it sometimes is referred to as a median anterior maxillary cyst.
This cyst may not always be positioned symmetrically
Periphery and shape
well defined and corticated and is circular or oval in shape.
The shadow of the nasal spine sometimes is superimposed on the cyst, giving it a heart shape.
Internal structure
Most nasopalatine duct cysts are totally radiolucent.
Effects on surrounding structures.
Most commonly this cyst causes the roots of the central incisors to diverge, and occasionally root resorption occurs 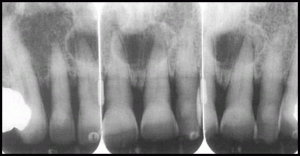 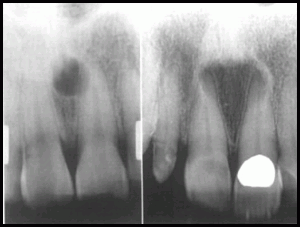 CYST LIKE LESIONS
SIMPLE BONE CYST
Synonyms
Traumatic Bone cyst,
Hemorrhagic bone cyst
CLINICAL FEATURES
SBCs are very common lesions.
Most occur in the first two decades of life, with a mean age of 17 years.
The lesion shows a male predominance of approximately 2:1.
RADIOGRAPHIC FEATURES
Location
Mandible
most often in the ramus
Periphery and shape
The margin may vary from a well-defined, delicate cortex to an ill-defined border that blends into the surrounding bone.
The lesion often scallops between the roots of the teeth
Internal structure
The internal structure is totally radiolucent
Effects on surrounding structures
In most cases these lesions have no effect on the surrounding teeth.

Scalloped border around the teeth and thinned the inferior border of mandible
DIFFERENTIAL DIAGNOSIS
An SBC may have an appearance similar to that of a true cyst, especially an OKC.
However, maintenance of some lamina dura and the lack of an invasive periphery and bone destruction should be enough to remove this category of diseases from consideration.

Developmental salivary gland defect
SYNONYMS
Stafne defect
Stafne bone cyst
static bone cavity
latent bone cyst
DEFINITION
A developmental salivary gland defect of the mandible is the development of a deep, well-defined depression in the lingual surface of the posterior body of the mandible.
More precisely, the most common location is within the submandibular gland fossa and often close to the inferior border of the mandible.
RADIOGRAPHIC FEATURES
A developmental salivary gland defect is a round, ovoid, or, occasionally, lobulated radiolucency that ranges in diameter from I to 3cm
Below the inferior alveolar nerve canal anterior to the angle of mandible, in the region of the antegonial notch.
The margins of the radiolucent defect are well defined by a dense radiopaque line.
This cortical margin usually is thicker on the superior aspect.

SCINTIGRAPHY
DEFINITION :
Scintigraphy is a diagnostic procedure consisting of the administration of a radionuclide with an affinity for the organ or tissue of interest, followed by recording the distribution of the radioactivity with a stationary or scanning external scintillation camera.
The diagnostic tests involve the formation of an image using a gamma camera or positron emission tomography.

Imaging may also be referred to as â€œRadionuclide imagingâ€ or â€œNuclear scintigraphyâ€
PRINCIPLE :
Diagnostic test in nuclear medicine exploit the way that the body handles substances differently when there is disease or pathology present.

The radionuclide introduced into the body is often chemically bound to a complex that acts characteristically within the body; this is commonly known as a TRACER

In the presence of disease, a tracer will often be distributed around the body and/or processed differently.
ARMAMENTARIUM :
A typical nuclear medicine study involves administration of a radionuclide into the body by intravenous injection in liquid or aggregate form, ingestion while combined with food, inhalation as a gas or aerosol
The most commonly used intravenous radionuclides are:
Technetium-99m (technetium-99m)
Iodine-123 and 131
Thallium-201
Gallium-67
Fluorine-18 Fluorodeoxyglucose
Indium-111 Labeled Leukocytes

The most commonly used gaseous/aerosol radionuclides are:
Xenon-133
Krypton-81m
Technetium-99m TechnegasÂ®
A gamma camera is a device used in nuclear medical imaging, to view and analyse images of the human body of the distribution of medically injected, inhaled, or ingested gamma ray emitting radionuclides.
A Thyroid Scintigraphy can help assess:

The end result of the nuclear medicine imaging process is a “dataset” comprising one or more images. In multi-image datasets the array of images may represent a time sequence (ie. cine or movie) often called a “dynamic” dataset
A collection of parallel slices form a slice-stack, a three-dimensional representation of the distribution of radionuclide in the patient.