Emergency surgery is necessary for people whose intestine has ruptured; intestinal rupture always results in infection of the abdominal cavity. During a diverticulitis surgery, the ruptured section is removed and a colostomy is performed. This means that the surgeon will create an opening between the large intestine and the surface of the skin. The colostomy is closed in about 10 or 12 weeks in a subsequent surgery in which the cut ends of the intestine are rejoined. 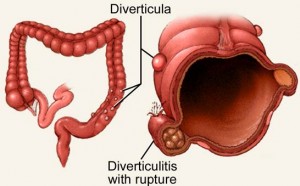 The first surgical approach consists in the resection and primary anastomosis. This first stage of surgery is performed on patients with a well vascularized, nonedematous and tension-free bowel. The proximal margin should be an area of pliable colon without hypertrophy or inflammation. The distal margin should extend to the upper third of the rectum where the taenia coalesces. Not all of the diverticula-bearing colon must be removed, since diverticula proximal to the descending or sigmoid colon are unlikely to result in further symptoms.

Diverticulitis surgery can be done in two ways: through a primary bowel resection or through a bowel resection with colostomy. Both bowel resections may be done in the traditional way or by laparoscopic surgery. The traditional bowel resection is made using an open surgical approach, called colectomy. During a colectomy, the patient is placed under general anesthesia. A surgeon performing a colectomy will make a lower midline incision in the abdomen or a lateral lower transverse incision. The diseased section of the large intestine is removed and then the two healthy ends are sewn or stapled back together. A colostomy may be performed when the bowel has to be relieved of its normal digestive work as it heals. A colostomy implies creating a temporary opening of the colon on the skin surface and the end of the colon is passed through the abdominal wall and a removable bag is attached to it. The waste will be collected in the bag.

However, most of the surgeons prefer performing the bowel resection laparoscopically mainly because the postoperative pain is reduced and the patient’s recovery is faster. The laparoscopic surgery is a minimally invasive procedure in which three to four smaller incisions are made in the abdomen or navel.

All colon surgery involves only three maneuvers that may vary in complexity depending on the region of the bowel and the nature of the disease which are the retraction of the colon, the division of the attachments to the colon and the dissection of the mesentery. After the resection of the colon, the surgeon normally divides the attachments to the liver and the small intestine. After the mesenteric vessels are dissected, the colon is divided with special surgical staplers that close off the bowel while cutting between the staple lines.

The primary bowel resection is the standard procedure for diverticulitis. It consists of the removal of the diseased or ruptured part of the intestine which is then reconnected to healthy segments of the colon. This is called anastomosis. Depending on the patient’s general medical condition, the procedure may be done traditionally, via a colectomy or laparoscopically, which requires smaller incisions and a faster recovery.

When excessive inflammation of the colon renders primary bowel resection too risky, bowel resection with colostomy remains an option. Also known as the Hartmann’s operation, this is a more complicated surgery typically reserved for life-threatening cases.

The bowel resection with colostomy implies a temporary colostomy which is followed by a second operation which has the purpose to reverse the colostomy. The surgeon makes an opening in the abdominal wall (a colostomy) which helps clearing the infection and inflammation. The colon is brought out through the opening and all waste is collected into an external bag.

The colostomy is usually temporary but it may be permanent depending on the severity of the case. Most of the time, several months later after the inflammation has healed, the patient undergoes another major surgery during which the surgeon rejoins the colon and rectum and reverses the colostomy.

In complicated diverticulitis, bacteria may subsequently infect the outside of the colon if an inflamed diverticulum bursts open. If the infection spreads to the lining of the abdominal cavity (peritoneum), this can cause a potentially fatal peritonitis. Sometimes inflamed diverticula can cause narrowing of the bowel, leading to an obstruction. Also, the affected part of the colon could adhere to the bladder or other organ in the pelvic cavity, causing a fistula, or abnormal connection between an organ and adjacent structure or organ, in this case the colon and an adjacent organ. 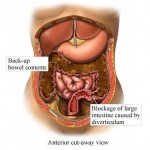