Cleft lip repair can be initiated at any age, but optimal results occur when the first operation is performed between two and six months of age. Surgery is usually scheduled during the third month of life.

While the patient is under general anesthesia, the anatomical landmarks and incisions are carefully demarcated with methylene blue ink. An endotracheal tube prevents aspiration of blood. The surgical field is injected with a local anesthestic to provide further numbing and blood vessel constriction (to limit bleeding). Myringotomy (incisions in one or both eardrums) is performed, and myringotomy tubes are inserted to permit fluid drainage. 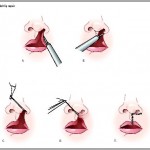 There are several operative techniques for cleft lip reconstruction. The Millard rotation advancement (R-A) technique is the most widely accepted form of repair. This method involves rotation of the entire philtral dimple (groove in the upper lip) and Cupid’s bow (double curve of the upper lip). The scar falls along the new philtral column (central section of the upper lip), and is adjusted as required since the procedure allows for flexibility.

The Millard procedure begins with an incision on the edge of the cleft side of the philtrum, and the cutting continues upward, medially, and to the side. A second incision extends to the buccal sulcus (top part of the upper jaw). The length of this incision depends on the size of the gap to be closed. In this second incision, the surgeon frees soft tissue, which allows him or her to completely lift the lip from the underlying bone. This dissection should be tested to ensure free advancement toward the middle (inadequate dissection is the root cause of poor results). Nasal deformity can be dealt with by a procedure known as the McComb nasal tip plasty, which elevates the depressed nasal dome and rim. Cartilage from the cleft side is freed from the opposite side, and is positioned and reshaped using nylon sutures.

Advantages of the Millard rotation advancement technique include:

Before and after Millard rotation advancement

The disadvantage of the Millard rotation advancement technique is the possible development of a vermilion notch (shortening of the entire lip in the vertical direction), resulting from contracture of the vertical scar.

Cupid’s bow is a critical part of the repair, making it very important to accurately determine the high point of Cupid’s bow on the lateral lip.

Facial clefting has a wide range of clinical presentations, ranging from a simple microform cleft to the complete bilateral cleft involving the lip, palate, and nose. A comprehensive physical examination is performed immediately after birth, and the defect is usually evident by visual inspection and examination of the facial structures.

Care must be taken to diagnose other physical problems associated with a genetic syndrome. Weight, nutrition, growth, and development should be assessed and closely monitored.

Presurgical tests include a variety of procedures, such as hemoglobin studies. It is important for the pateint’s parents and physician to discuss the operation prior to surgery.

The postoperative focus is on ensuring proper nutrition, as well as lip care and monitoring the activity level. Breast milk or full-strength formula is encouraged immediately after surgery or shortly thereafter. Lip care for patients with sutures should include gentle cleansing of suture lines with cotton swabs and diluted hydrogen peroxide. Liberal application of topical antibiotic ointment several times a day for 10 days is recommended. There will be some scar contracture, redness, and firmness of the area for four to six weeks after surgery. Parents should gently massage the area, and avoid sunlight until the scar heals.

The patient’s activities may be limited. Some surgeons use elbow immobilizers to minimize the risk of accidental injury to the lip. Immobilizers should be removed several times a day in a supervised setting, allowing the child to move the restricted limb(s).

Interaction between the orthodontist and surgeon as part of the treatment team begins in the neonatal period, and continues through the phases of mixed dentition.

There may be excessive scarring and contraction of the lips. Two types of scars, hypertrophic or keloid, may develop. Hypertrophic scars appear as raised and red areas that usually flatten, fade in color, and soften within a few months. Keloids form as a result of the accelerated growth of tissue in response to the surgery or trauma to the area. The keloid can cause itching and a burning sensation. Scratching must be avoided because it can lead to healing problems. Some patients require minimal revision surgery, but in most cases, the initial redness and contracture is part of the normal healing process.

Ideal surgical results for cleft lip include symmetrically shaped nostrils, and lips that appear as natural as possible and have a functional muscle. Many characteristics of the natural lip can be achieved; however, the outcome ultimately depends on a number of factors, including the skill of the surgeon, accurate presurgery markings, alignment of bones within the affected area, uncomplicated healing of the initial repair, and the effect of normal growth on the repaired lip. Additional surgical correction to reconstruct nasal symmetry is sometimes necessary.

Generally, cleft lip repair is well-tolerated in healthy infants. There is no major health problems associated with this reconstructive surgery. Depending on the results, it may be necessary to perform additional operations to achieve desired functional and cosmetic outcomes.

There are no alternatives for this surgery. Obvious deformity and impairments of speech, hearing, eating, and breathing occur as a direct result of the malformation. These issues can not be corrected without surgery.