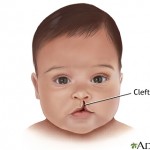 Cleft lip and cleft palate are birth defects affecting the mid facial region. Patients with cleft lip might have a small notch on the lip or a wide opening which involves the lip and the palate ( the roof of your mouth) The exact cause of cleft lip/palate is unknown but it is believed that genetic, usage of certain drugs during pregnancy, viruses, toxins are the causative factors of cleft lip and palate.

Detection of cleft lip/palate can be detected during pregnancy by an ultrasound screen or a three dimensional magnetic resonance imaging. Detection during the pregnancy stage will prepare the parents mentally and allow them to understand the condition.

Prevalence of cleft lip and palate

Types of cleft lip and palate

1)Â Â Â Â Â  Cleft lip: cleft which occurs on the lips (without affecting the palate) It may varies from a small notch(this is knownÂ  as incomplete cleft), to a complete cleft (which extends from the vermillion border of the lips to theÂ  floor of the nose)

Feeding can be a problem in cleft babies. Â A cleft baby is unable to generate a positive pressure which is needed to suck the milk from the breast or milk bottle.Â  As a result of cleft, there can be a communication between the oral and nasal cavity which causes nasal regurgitation during the feeding process.

What we can do to overcome this problem:

Aesthetics can be a problem in patients with unrepaired clefts. Â Surgery is often indicated at an early age to avoid and minimize future esthetic problems. Â

Patients with cleft lip/palate are more prone to fluid buildup in the middle ear. Repeat ear infections can also causes hearing loss in cleft patients.Â  Hence it is important to monitor the hearing and middle ear function of cleft infants.

Children with orofacial clefting have more dental problems than other children.

Dental problems such as missing teeth, extra tooth, abnormal size/shape of tooth can be presented in cleft patients. There is also an increased need for orthodontic intervention to correct the present/developing malocclusion.