A wide range of disease may present with lesions in the neck, but the most common complaint is of the swelling and/or pain in the lymph nodes. Over a quarter of the lymph nodes in the body are connected with cervical lymph nodes (glands in the neck) situated in the head and neck. It is not surprising then, that many diseases of the lymphoid tissue present primarily in this region.

Discrete swellings in the neck may occasionally be caused by disorders in:

More diffuse swellings of the neck may be caused by:

The location of a swelling or lump in the neck will often give a good indication of the tissue of origin, and the age of the patient may also help suggest the most likely diagnoses. The duration of the lesion is also relevant, one that has been present since an early age is likely to be of inborn origin, while a lump appearing in the later life and persisting may be cancerous.

Most common causes of swellings in the neck at different ages

What is a lymph node?

A lymph node or lymph glands is the source of lymph and lymphocytes. The tonsil is lymphoid tissue located between the pillars of the fauces and there is similar material in the posterior aspect of tongue (lingual tonsil) and the posterior wall of the pharynx (adenoids). These three areas form a ring of lymphoid tissue around the oropharynx (Waldeyerâ€™s ring).

Enlarged lymph nodes of the neck

Lymph nodes can enlarge in a number of disorders, often because of disease in the local area of drainage, sometimes because of disease affecting the wider lymphoreticular system (lymph nodes, liver and spleen). It is important therefore to consider the whole body when dealing with lymph node swellings.

Enlargement of the cervical lymph nodes alone usually arises because they are involved in an immune response to an infectious agent in the area of drainage and nodes are then often firm, discrete and painful to touch but are mobile (lymphadenitis). The focus of inflammation can usually be found in the drainage areas which is anywhere on the face, scalp and nose, sinuses, ears, pharynx and mouth.

Lymph nodes that are sore may be inflammatory (lymphadenitis). Swollen lymph nodes from acute infections are usually painful to touch, soft and obvious, while chronic infections give firm lymph nodes. Nodes that are increasing in size and are hard, or fixed to adjacent tissues may be cancerous. Nodes that are enlarged and firm and matted or rubbery may be due to leukemia. In the lymphomas particularly, the nodes may be rubbery, matted together and fixed to deeper structures. In the systemic infective disorders the nodes are usually firm, discrete, painful to touch and mobile.

Enlargement of cervical lymph nodes alone may also occur when there is reactive increased number of cells to a cancerous tumor in the drainage area, or metastatic infiltration. The latter may cause node to feel distinctly hard and it may bound down to adjacent tissues (â€˜fixedâ€™), it may not be discrete and may even, in advanced cases, ulcerate through the skin. 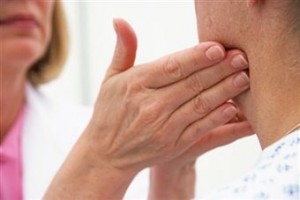 One cannot feel a normal lymph node therefore a palpable one must be abnormal.Â  The finding of an enlarged node or nodes in children is relatively common and can be reasonable managed by watchful waiting. Undiagnosed cervical lymphadenopathy in adults mandate biopsy-establishing definitive diagnosis.

Routine intra-oral and extra-oral examinations are done to exclude the common causes: apical and periodontal abscesses, pericoronitis, tonsillitis, otitis and others.

Supplementary investigations such as full blood count, fine-needle aspiration cytology, magnetic resonance imaging (MRI) and computed tomography (CT) scans may be needed to exclude malignancy. An excision biopsy of the node may be required if the diagnosis still not been established.